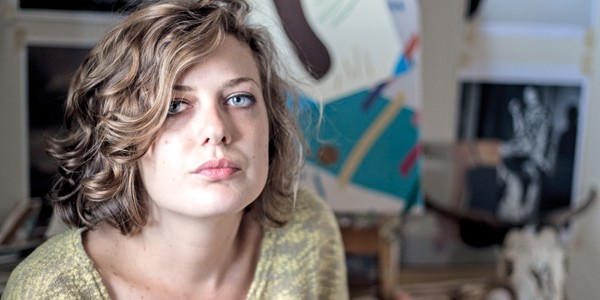 Beautiful exhibitions with naughty names are putting gay artist Imogen Taylor on the map. Her latest, Glory Hole is about to become the talk of K road!

Glory Hole sounds provocative . The words suggest debauchery, anonymity, arousal. If you didn’t know what a glory hole was, you might think it was something holy, something divine. Perhaps you do know what it is and think it is divine.

Fittingly, Glory Hole is the title of Imogen Taylor’s forthcoming exhibition at Michael Lett’s gallery in October. I met Imogen on a particularly wet Monday morning at Alleluya to discuss her work.

As it turned out, the weather and the K road setting were both topical.

“I thought Glory Hole was kind of perfect [as a title] because Michael Lett just moved back to K road. The work is a lot darker than usual, a bit moody. Maybe because I have been making it through winter and the light is different. Usually, I’ve made shows leading up to summer. When the light is like this it has a huge impact on what you make.”

The light Taylor indicates is delicate and cold. Steam is rising visibly from our coffees and the sky outside is white. The bright yellow sunshine that streams through the huge windows of St Kevin’s arcade in summer feels a world away.

I have heard Taylor’s work described as ‘smutty’ and am curious to know how she feels about this.

Taylor’s previous shows have had similarly ‘smutty’ titles such as Blowhole and Balls Deep. “The shows always have some kind of underlying theme. Sometimes I choose to express that; sometimes I don’t. Often it’s through the titles… they often have a double entendre. With Glory Hole… there’s this kind of two-sided thing of what is in front and behind a glory hole, although that’s probably a bit of an assumption for me. Being a gay woman I can’t say I go check out glory holes all time.”

“I’m okay with charming. I think painting naturally has this charming element… if you are going to do something that is grotesque or hard to look at you have to start by pulling your viewer into it. It does have to have something seductive to get people to look at it.”

The idea of a dual function, of there being two sides to the glory hole, seems to be a recurring factor in Taylor’s work. It is capable of being many contradictory things at once, being simultaneously abstract and figurative, smutty and charming, right and wrong. When I comment on the beautiful use of colour in her Balls Deep exhibition, Taylor responds, “I’m really into colour… kind of gross colour as well.” Even colour is open to interpretation, to being gross and beautiful at the same time.

As a final question, I ask Imogen if there’s anything she’d like to say about her work. “You don’t want to speak too much on behalf of the work,” is her considered response. She shrugs. “It is what it is.”

A fittingly vague description for work that defies concrete description, work which is wonderfully contrary and exists colourfully in a grey area.