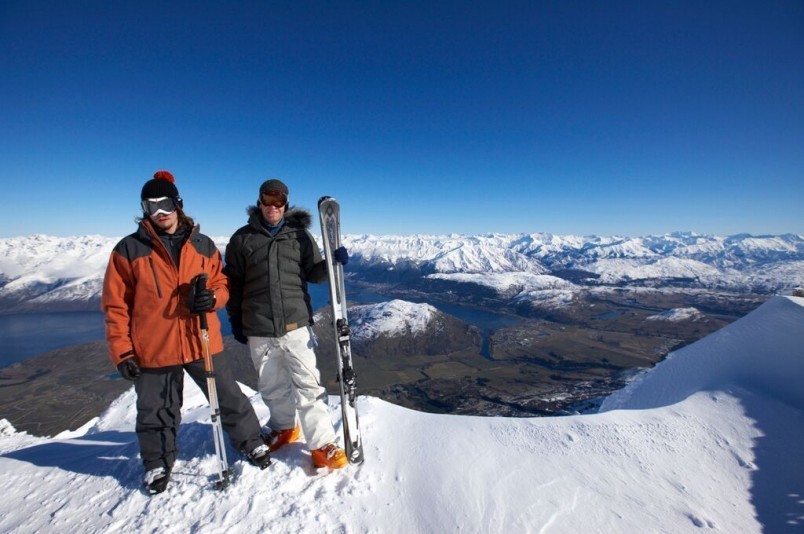 From Saturday 29 August Queenstown will be gayer than ever as Gay Ski Week explodes with colourful daily events and options to party into the wee small hours every night! “The atmosphere on the mountain is awesome. We met one of our best mates on the chair lift in our second year.” Gay Ski Week regular Tim McTigue told express. “We go back most years as a group with 5 or 6 others. I can’t recommend the week enough.”

To Ski or to Snow Board, That is the Question!

“Try both if you can, it may surprise you what you’re good at,” Gay Ski Week aficionado Vicky Sefton tells us. She tried a one-day starter pack option for both sports, which she says was great value for money. “I’ve ridden a skateboard for years so assumed I would be better at snowboarding but it’s actually turned out that I’m better at skiing… [Both] are good for fitness too! Ever wanted thighs of steel?!” She giggles.

Vicky admits there are technicalities to both sports that will suit different people. “It takes a few tries to get confident on a snowboard but once you’ve mastered the basics progression is pretty swift unlike skiing where often the progression at the beginning is pretty fast and then it tapers off leaving many people competent skiers with not so great style… I personally prefer skiing over boarding because I feel more in control on a black run than I do on a board. If you can do both then you can choose the best ride for the conditions on that day – skis are better in icy conditions, boards are better in fresh snow.”

Despite swinging for skiing Vicky definitely sees the advantages for sole boarders. “I’m less worried about my knees when snowboarding, which means I’ll take more risks when trying new things. On skis that can be a bit scary as there’s always the risk of tearing a knee ligament when your legs end up in opposite directions.” And most importantly, “Snowboarding is just cool, there’s no doubt about it and you feel cool when doing it, big lazy sweeping arcs and no poles getting in the way so it’s a very free feeling motion.”

And when you’re not feeling ‘cool’ on the slopes Gay Ski Week has so many more Winter Activities to experience!

The More FM Opening Party at funky pop-up bar The Find is always a fab way to introduce yourself to the other hot ski bunnies, but we warn you – don’t go too hard at this one, because you’ve still got a week full of parties to get through and the next night you’re going to be getting very wet (dramatic pause) at the LYC Wet & Wild Foam Party at Loco Cantina.

Just when you know you can’t handle another hangover, you can chill out and test your brain cells rather than destroy them at the Durex Queer Quiz Night at The Ballarat Trading Company.

After that calm evening, you can be looking your best at Highlands Hook Up Adventure Day where you can experience the speediest speed date of your life, hurtling around a racing track in a Porsche Cayenne heading off into the sunset in a go-kart! It will be like an episode of the Bachelor on steroids.
The following night will give the opportunity for quieter romance as you enjoy a five-course degustation menu at The Rees Hotel for the True South Dining Experience, with matching wines.
The Caluzzi Girls will bring their brand of Auckland drag to Queenstown the following evening at the Gibbston Valley Cabaret Night at the Skyline Gondola, which boasts fabulous views.

The legendary Skycity Queenstown Karaoke event is always bustling, but save some energy (and voice) for The Family Bar and Night Club ‘Life Is A Beach’ party the next night. Their pool party last year was one of the wildest of the week and with Adam Love DJing this beach party, we expect much of the same.
Closing the week is Broken Shed’s Once Upon A Time Dance Party. Mark are words – get your costume now! There’s no half measures on the South Island and EVERYONE will dress up as their favourite fairytale. An enchanting closing night is guaranteed.

Gay Ski Week NZ are also running parties in the same week. These kick off with a Break The Ice party at host hotel the Crown Plaza on Saturday 29 August. Legendary Sydney DJ Kitty Glitter will play at Prime Bar for their Fluffy Queenstown party the following night. A We Love 80s Ice Skate Party takes over the Ice Arena on Monday 31st August. Followed by a VIP Degustation Dinner at acclaimed eatery Gantley’s on the Tuesday. Wednesday night prepared to strip down to your speedos for a Luxury Pool Party at the Hilton Hotel with sexy DJ Dan Murphy on the decks. Kitty Glitter will return to Prime Bar on Friday 4 September backed by Dan Murphy and Brisbane’s Harry K for their White Out party finale.