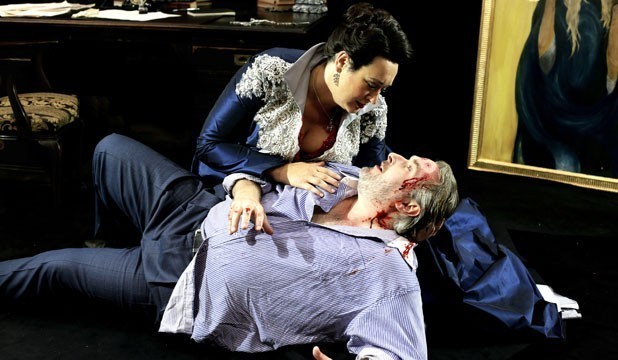 The Opening Night of Puccini’s Tosca at the Aotea Centre on Thursday 17 September featured a feast for the aural, visual and olfactory palette and concluded dramatically and far too quickly for an evening that was most enjoyable.

Tosca is a pacey story of love, jealousy, dishonesty, intrigue, torture, duplicity, attempted rape, murder and suicide. Set in Rome over a few days in 1800 during a political upheaval, the scenes take place in locations that still exist today.

The plot realistically reflects this slice of history but serves only as a background of a psycho-drama. The characters introduce themselves in pairs: we meet the Sacristan (Barry Mora) and Cavaradossi- the irrepressible Simon O’Neill.

What is it about tenors that make us fall in love as much as Tosca – Orla Boylan – does. She is consumed with love for Cavaradossi amidst her (perhaps not so unfounded) fits of jealousy. She is utterly, deliciously convincing, her glorious voice a perfect match for O’Neill’s effortless power and depth.

Scarpia (Phillip Rhodes) threatening baritone is the epitome of a nasty, debauched lecher, a man lean and mean who could’ve stepped out of ‘The Family’ movie of Cosa Nostra.

At the conclusion when practically everyone is dead, it remains to applaud the Auckland Philharmonia Orchestra, (the unsung heroes) and The Freemasons NZ Opera Chorus, for laying such solid and tender foundations to a magnificent evening. Such wealth of talent and creativity within reach to all that appreciate perfection cannot be missed.