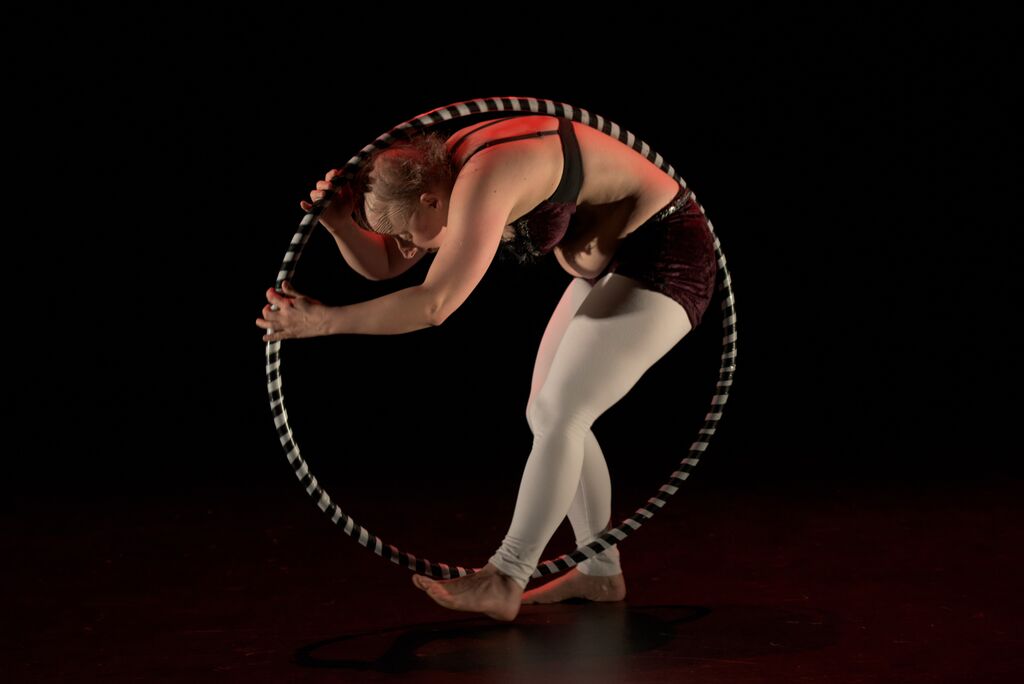 Sarah Houbolt’s opening performance of her one-woman show was amusing, moving, and revealing.

Titled Kookoo the Birdgirl, Sarah’s performance is rooted in the story of an American woman, Minnie Woolsey, who grew up in an asylum, later escaping to join a circus. We do not know how disabled or ‘abnormal’ Minnie’s body was, but she was cast in Tod Browning’s 1932 film, Freaks. The film became a cult classic, with one of its lines “We accept you! One of Us!” becoming a catch-phrase for many years.

Sarah has chosen Minnie Woolsey as the subject of her performance because Sarah herself has been seen as a ‘human oddity’, and is legally blind. “I make people feel better about themselves,” she declares as Minnie, a statement which obviously can be true for Sarah. A kinder phrase, ‘natural wonder’, comes from Browning’s film and it is this phrase which, when taken on board, opens our perceptual doors as Sarah’s performance begins.

Transforming herself into Minnie, who lived in the era of compulsory sterilisation and anti-marriage laws for disabled women, Sarah dons huge duck feet and a grey feathery bodysuit to become Kookoo, the Birdgirl. Her delight in the freedom that the costume affords her is obvious via clicky hand movements and sweeping pirouettes. These go on a little too long, to this reviewer’s mind, as they are unconnected to anything other than freedom, a point which probably would be effectively made in half the time.

A white feather, symbolising the wings of freedom, is a continuing theme through Sarah’s performance: sometimes large and carried on her head, sometimes an image on the backdrop, sometimes tiny and plucked from below her breast.

At the heart of the performance, a clash of cymbals and drumbeats as Sarah divests herself of the grey feathery costume to reveal a black sparkly bra-and-shorts costume seen in every circus performance, and appears with a large hula-hoop. Her performance with the hoop is quite riveting, with Sarah herself showing moments of true beauty in her movement.

This is an important performance piece in a society like ours which places undue value on physical beauty. In our rainbow world, we happily accept deviations from the physical norm only in the drag world, where towering wigs and clownish make-up become signs for our approving laughter.

Assisted by a skilled Australian team (director, projection design, and one of two choreographic collaborators), Sarah Houbolt’s performance reveals a range of elastic, interpretative movement honed by her work with companies such as Cirque du Soleil, and New Zealand’s own Touch Compass.

A generous audience at TAPAC gave Sarah Houbolt a well-deserved standing ovation. Her radiant reaction to the ovation underlined her own in-performance words “Freaks are endowed with normal emotions.”