Her Excellency, the Right Honourable Dame Patsy Reddy, New Zealand’s Governor-General (representative of Queen Elizabeth II) talks to Oliver Hall about standing up for human rights, the effects of the AIDS and Coronavirus pandemics and the rise of the Rainbow community.

It’s a windy and rainy day in Wellington as we buzz the intercom on a nondescript gate on the outskirts of Government House. It’s not ideal conditions for getting a first-hand look at the property’s 12 hectares of manicured gardens and Tudor-style buildings, but beggars can’t be choosers, and we are feeling like extremely lucky beggars since our request for an audience with the Governor-General was granted.

After a short wait in one of the mansion’s many gracious drawing rooms, Dame Patsy Reddy appears. A smiling vision in pink. 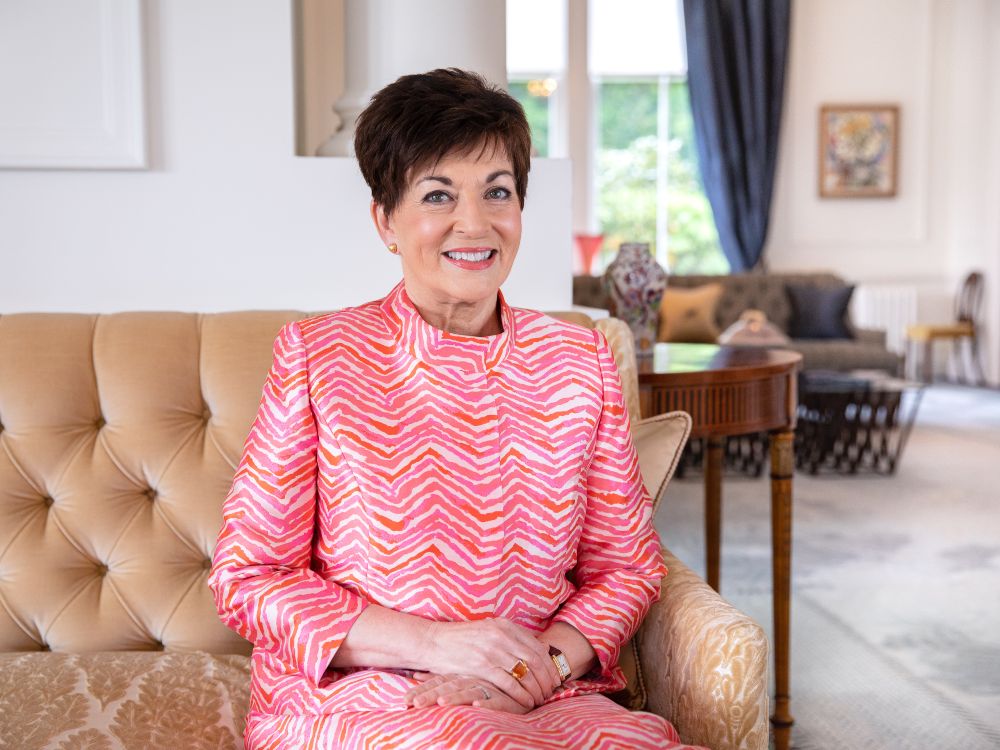 We’re here to understand how our representative of the monarch, views our community and why she spoke at last year’s Wellington International Pride Parade.

“Well, I was asked,” Dame Patsy says with a laugh, as we relax on plush sofas after our photographer completes our cover shoot in record time. “And I always like wearing glitter,” she adds with a cheeky smile.

At the Parade, Dame Patsy seemed thrilled to be there. With each nail painted a different colour of the rainbow, she began her speech by saying, “as The Queen’s representative, I am delighted to see so many other queen’s represented,” before noting how lucky we were to live in a country that embraced, “freedom of expression.” Finally, she concluded that ridding the world of hate and bigotry, “is a challenge for all of us, because together we are a nation.”

I’m yet to hear The Queen, herself, utter words as powerful.

“It was a beautiful day,” Dame Patsy says enthusiastically. “I thought it was fantastic to see the police and members of the Defence Force and all sorts of establishment figures who were really thrilled to be part of it… It wasn’t them and us, it was all about ‘us’.” She tells us she first embraced the gay rights movement in the late seventies when she began studying law at Victoria University. “The first thing that really grabbed me was women’s rights and that second wave of feminism,” she says, explaining that abortion law reform, homosexual law reform and anti-apartheid movements quickly followed. “All of those human rights issues that really seized people in the early eighties – naturally I felt a part of.”

She talks with passion about how the issues of the time, united to form one common belief that helped build the attitude of modern New Zealand. “If you stood for a woman’s right to choose, you stood for everyone’s right to choose everything, including who their partners were and the way they loved. I didn’t see it as distinguishable.”

Change, however, does not happen overnight and Dame Patsy notes that the passing of Homosexual Law Reform didn’t change attitudes as quickly as she had hoped.

“I thought I was at the vanguard of change, in terms of changing how people thought in society but in fact, it took forever! We finally got homosexual law reform in the eighties and thought ‘phew, we don’t need to worry about that one now’, but actually change doesn’t come instantly.”

What followed instead was the AIDS epidemic and with it, a new wave of stigma and bigotry faced by gay men.

“It was a terrible epidemic when I look back at how it affected people I knew and how it made a huge difference in the world. It was like this pandemic,” she says referring to COVID, “but that pandemic [AIDS] disproportionally affected parts of the community.”

She breaks off for a moment with a sadness in her eyes, before reflecting, “I always expected that, once you got past a certain issue, things would get better but it takes a while to get there. It’s taken us a while to realise that’s there’s more than just lesbian and gay.” She says, going on to describe the transgender tipping point as a ‘breakthrough.’

“I go to investitures where people introduce me to their families. And some have introduced children who are transitioning. That would have never happened before,” she says with a hopeful tone. I mention what a sign of the times Joe Biden’s victory speech was. The first by a president to specifically mention the transgender community.

“I think people like Georgina Beyer made a huge difference,” she replies. “I remember Georgina from when she stared in Jewel’s Darl, a really lovely film, and then she became Mayor of Carterton, which is a really conservative town, and then an MP! It didn’t normalise it for everybody, but for those of us on the more liberal end of the spectrum, which I unashamedly am – we realised this is just part of who we are!”

Early last year, Dame Patsy presented Georgina with her New Zealand Order of Merit. “I said to her, you should have got this year’s ago,” she tells us jubilantly.

With Rainbow rights and the public perception of our community having notably progressed Dame Patsy believes New Zealand is now ready for an LGBT+ Governor-General.

“I cannot imagine that anyone would question it. When you look at our current parliament and indeed our government,” she says before acknowledging that our out and proud Deputy Prime Minister Grant Robertson is related to her husband.

We also note that of the three leading roles in New Zealand: Prime Minister, Governor-General and Chief Justice; are all filled by women.

“It’s a good start and it’s not going to end here,” applauds Dame Patsy enthusiastically. “I loved Kamala Harris saying the other day, ‘I may be the first female Vice-President but I’m certainly not the last’.”

In September Dame Patsy will step down as Governor-General, having completed five years in the role.

“I’ve deliberately not to spend much time thinking about what comes next because I have tried to commit everything to this role. I can’t quite imagine what my life will be after this, but in some ways, I guess, I will get it back. This is quite a public role in lots of ways, particularly for a person who wasn’t a public figure before that. It’s such a privilege being Governor-General, but I think five years is a good term.”

“I imagine you’ll miss the house,” I reply, looking around at wall after wall adorned with priceless art.

“Yes, but as you might have seen today, it’s a pretty drafty old place in a storm,” she answers with a worn tone, that suggests half a decade is long enough.

Before taking the role in 2016, Dame Patsy and her husband David were flown to Buckingham Palace for a face to face interview with the Queen.

“We had lunch with the Queen and the Duke of Edenborough. Just the four of us and two corgis,’ she tells us. “She was very charming, it was extremely awesome – in the truest sense of that word, to be in the presence of the Queen, a woman who has met more people and shaken more hands than anyone in the world ever. We had a lovely couple of hours. And I guess I passed because I got to be Governor-General!” She laughs.

Since then Dame Patsy returned to Buckingham Palace last year for the D-Day celebrations and writes to her Majesty every six months or so, with an update on New Zealand. She notes that The Queen, “doesn’t want to hear what she can read in the news.”

So what is there to say about Aotearoa, when the rest of the world are mask-clad, socially-separated and locked-down?

“Well, I’m immensely proud of where we are and what we’ve achieved. I think all New Zealanders are. Some of it by luck, geography, being a small country of five million, but also because we do have a stable, political, constitutional environment and part of that is because we have a framework that allows for an enduring sense of what keeps the country working,” she says, dutifully commending the crown before adding a thought-provoking statement.

“Our engagement with our government, our judiciary and our constitutional democracy, has a bit more development to it than some of the countries that we would once have thought were peers, or countries to be admired.”

Now, if this were Drag Race, I would definitely call that ‘shade!’

It is not only Coronavirus that has produced unprecedented times in Dame Patsy’s reign.

“The Christchurch Mosque Massacre had a great effect on us all in terms of understanding what was going on it our country and feeling powerless, and an enormous sympathy, empathy and desire to correct whatever it was that was enabling our country to be a vector for terrorism, which we had never come across before,” she says echoing the thoughts of many.

“I had 24-hour security because we were at a heightened security terrorism alert, so I had to get used to having diplomatic protection service officers whatever I did. Which I know is typical for Prime Minister’s but for the Governor-General. I typically have cover when I’m doing official functions but not when I’m sitting at home on a Sunday. We had much more strict security everywhere we went, which feels odd for New Zealanders. And felt odd for me.”

Odd ways of living would prevail again as our country went into Lockdown to combat COVID. For Dame Patsy that meant her events, we cancelled and she was locked down with her husband and only a few of her aides.

“We just had a bigger house and bigger lawns to mow.” She tells us, before confessing,  “actually I’m lying, we left the lawns!”

Her candour continues as she admits, “and we got into Zoom cocktails in a big way. Went through far too much gin… We tried to Zoom with our dog Coco who was staying with another family at the time, but she wasn’t very good at understanding where the voice was coming from! We did miss her a lot.”

As our time comes to an end, I ask what Dame Patsy’s advice will be for the next Governor-General, and she bestows a mantra used by all the best public speakers – leave them wanting more!

“You need to have an authentic voice when you talk to people, but it doesn’t need to be a deep long, meaningful speech. The speech I gave at the Pride parade was quite short and no one has ever complained that a speech is too short!”

Let’s hope our next Governor-General will also display such candid support for our Rainbow community.