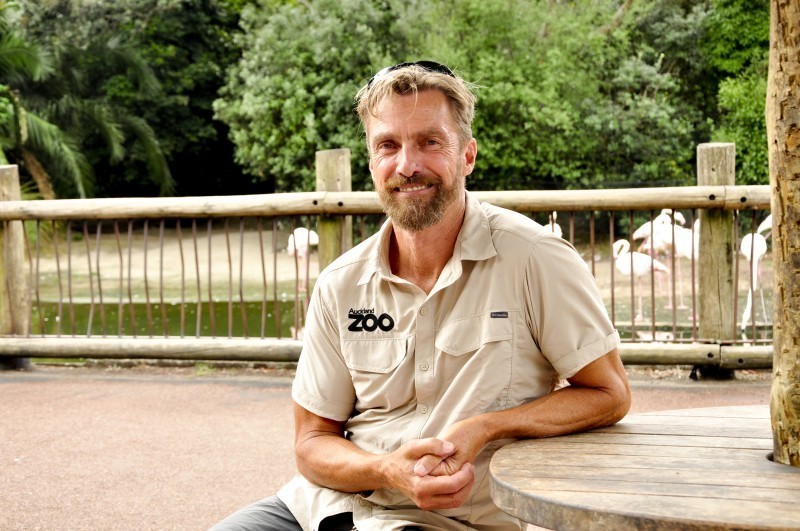 Kiwi conservation expert Peter Fraser tells us why he left his glamorous life behind to help the world’s wildlife and explains what we can all do to help the cause.

Peter Fraser was your typical high-flying world-travelling gorgeous kiwi gay man. Until a self-professed ‘midlife crisis’ led to a career jump that found him up to his elbows in orangutan faeces.

A former model, Fraser has lived in London and New York; run his own imported furniture store in Sydney, and launched gyms in South Auckland. But it was that textbook desire to ‘make a difference’, that saw him swing for a Unitec course in Animal Management and accept the role of Orangutan Keeper at Auckland Zoo. A role he remembers fondly, admitting, “they were smarter than me some days.”

Over the years, Fraser moved on from his flame-haired friends, eventually becoming Auckland Zoo’s Conservation Fund Programmes Coordinator. His success in the role was acknowledged last year when the Zoo and Aquarium Association selected him for their Gibbs Wildlife Conservancy Conservation Award.

To fund Fraser’s work, proportions of ticket entry to Auckland Zoo and the Zoo’s unique behind the scenes animal experiences, go directly into their conservation fund, where he distributes it to conservation foundations both locally and internationally. “The Conservation Fund was established in 2000 and it came from the ground up. The keepers wanted to do something for the wild counterparts of the animals we look after,” says Fraser who recently returned from Africa where they support foundations that protect cheetahs, rhinos and giraffes.

“A big part of the experience of attending Auckland Zoo now isn’t just seeing the animals but also learning about what issues they are facing with more and more exotic and local species facing extinction,” says Fraser, explaining that visitors will be given information about how their buying habits can affects wildlife the world over. “What we do in NZ impacts the Sumatran Orangutan – from buying outdoor furniture, which is FFC certified to purchasing food and cosmetics which are palm oil free.”

‘Conservation education’ has been a movement most leading Western zoos have followed since the beginning of the current millennium, keeping these long-standing institutions relevant in the modern age. “In the last 10-15 years the extinction crisis really became apparent,” says Fraser. “Zoos recognised that we could actually do something with keepers organically deciding they wanted to raise money to help the wild counter parts of the animals they were looking after, and the good zoos have really made progress with that.”

With ten per cent of the world’s population visiting zoos every year, the potential for impacting people’s environmental understanding has lead zoos to become the third largest contributors to conservation projects throughout the world. But Fraser believes we are living in a time where our eco-systems need more support than ever.

“We are actually going through a mass extinction period. There have been several before, but they’ve been caused by things like the ice age! We are [now] loosing species daily.”

He points out New Zealand is as badly affected as anywhere. “A lot of our native reptile species on the South Island are disappearing… I work closely with the Kia Conservation Trust. Historically New Zealand had hundreds of thousands of these iconic parrots – up to the 1970s the government put a bounty on them because they were a pest to farmers. Records show they killed over 150,000. Now there are fewer than 5000 left. With the NZ Kakapo there are estimated to only be 126 remaining. All it takes is one disease and they could all be gone. Every country can go through a list of animals like that.” Fraser goes on to state that numbers of Rhinos worldwide are now probably too low to save, due to the enormous value these animals possess to poachers.

The picture seems bleak, but Fraser believes that if governments address certain key issues, the situation could be dramatically improved and advices those that care, to act. “We have to address the illegal wildlife trade and more sustainable forms of food production, but government’s don’t seem to act unless people make them act. They rarely do the right thing unless they are forced too. In democracy we have that opportunity to tell them what we want and what we don’t want… What we spend is also really powerful. It affects corporates and corporates influence governments.” He uses the example of consumers boycotting Cadbury’s when they changed their chocolate recipe to include palm oil, and Cadbury retracting the recipe change as a result.

One of the success stories achieved through Auckland Zoo’s Conservation Fund offers hope for species with dwindling numbers. “Where we support tigers in Sumatra [through an organisation called 21st Century Tiger] has turned out to be one of the few places where tiger numbers have risen [from only 100 to 177] in the last ten years.”

This modern day plight has turned the notion that ‘an animal being raised in captivity is cruel’ on it’s head. Fraser believes that while there are still bad zoos out there, the good zoos are truly great.

“Burma (the elephant) walks around our zoo everyday. She couldn’t do that if she didn’t trust her keeper. Charlie (a large male orangutan) had a tooth problem and needed to be anesthetized so the dentist could extract the tooth. He trusted his keeper so much he actually put his arm out to have a sedative injected and a blood sample taken. He’s rewarded for that but it’s still his choice. That’s the relationship we build with animals, it’s stress free and it makes their management better and smarter.”

“There’s this illusion that animals in the wild are living great happy lives! [In reality] the wild young elephants are starving to death. Because of that they are crop raiding, so the farmers poison them by putting rat poison in watermelons, [causing them] very slow and painful deaths. Or they are hunted and shot by poachers. They don’t get that in captivity. They are looked after by a dedicated team of professionals, who attend to their physical and psychological health. They are given medical care. They live to old age, which doesn’t happen in the wild.”

He concludes. “If there comes a time when there’s no place for a zoo I would be the first one to say ‘close them down’, but with the crises happening in the wild, zoos have a role and there’s less hope without them than with them.”

To find out more about Peter’s work visit www.aucklandzoo.co.nz.