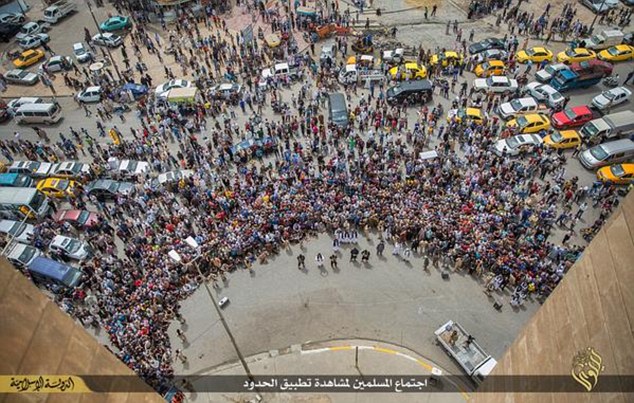 Shocking new images have emerged of ISIS executing more gay men, which appears to have the tacit approval of many locals in the ISIS controlled areas according to one University of Auckland academic.

Militants fighting for the Islamic State in Iraq have brutally murdered three gay men by throwing them from the top of a high building in front of a huge crowd of bloodthirsty onlookers.

Many of the victims are not immediately killed by the fall. But as one might expect, ISIS has its own particularly barbaric contingency plan for such a circumstance.

According to other media outlets, the jihadis who organise the public executions always ensure there is a large pile of rocks on hand at the site, which the baying crowd are encouraged to use to stone any survivors to death.

Speaking to express, Associate Professor Stephen Hoadley who teaches in the Politics and International Relations department at the University of Auckland says that the “fundamentalist Jihadists appear to be totally intolerant of persons who don’t agree with their dogma and are especially hostile to GLBT people.”

Hoadley says there appears to be little active resistance to the regime in many ISIS controlled areas. “In devout Sunni Muslim communities the response may be the ignore the murders or even tacitly condone them as Germans did Hitler’s policies towards the Jews” he says.

However Hoadley also says that could possibly change if ISIS were to crack  down as severely on other groups  they deemed were in violation of their strict interoperation of Shira law.

“As the murders spread to other Sunnis such as women not sufficiently covered up or adulterers, the support for ISIS rule will erode and passive resistance or flight to non ISIS areas may begin.”