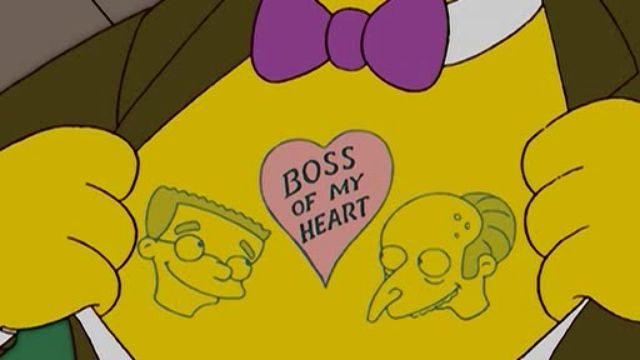 After 27 seasons and over a decade of hints and suggestions, Waylon Smithers has finally revealed his sexuality on The Simpsons.

The episode has been applauded for its understated and delicate handling of Smithers’ coming out.

His affection for his employer, Mr Burns, has been one of The Simpsons’ longest-running plot devices.

However, in an episode aired in the US this week, the long-suffering employee admitted his feelings after he was forced to save his boss’s life in a skydiving accident. But when Mr Burns continues to mistreat him, Smithers finds the courage to quit.

The opportunity allows him to be open about his sexuality for the first time, and causes Homer to host a party to set him up.

In one scene, Homer downloads the gay hookup app Grindr on Smithers’ behalf, while another includes a cameo from Star Trek actor and vocal LGBT advocate George Takei.

Smithers instead finds a connection with the bartender Julio, and with him engages in a whirlwind relationship.

Eventually though, he returns to Mr Burns, who accepts him in his own way – by giving Smithers his performance review (“excellent”) for the first time, along with a hug.

For screenwriter Rob LaZebnik, understatement was always the intention.

“We didn’t really want to have that big moment of ‘I’m out,’ you know?” LaZebnik told the New York Post.

“Instead, just have it be a big embrace — like everyone knows it.”

LaZebnik said he wrote the episode for his son Johnny, who is gay.

“I am a midwestern guy, so I don’t tend to wear my emotions on my sleeve, but I thought, ‘what better way to tell my son I love him than to write a cartoon about it?’” LaZebnik said.

However, Johnny said he already felt accepted by his father.

“The revelation that my father loves me is not much of a revelation, thankfully,” he said.

“We’re as close as a straight dad and a gay son could be.”