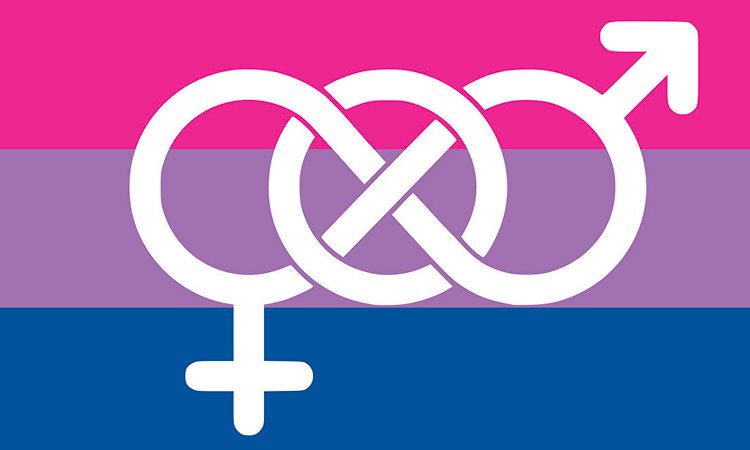 My flatmates and I just started a bi+ film night. We craved seeing ourselves, and wondered how representations of people attracted to more than one gender might have changed over time. The usual reasons people watch films.

Do you know how hard it is to find bi+ storylines? Films with characters who describe themselves as bi+, or any other identity associated with loving or fancying more than one gender? Or even films which are not just plain biphobic?

Let me tell you. Freaking hard. Our inaugural film was Chasing Amy. The explicit biphobia from both lesbians and straight men rang true – in fact, it felt pretty much like watching some of my life – but it loses points for the bi+ character finding Ben Affleck attractive. My fave so far? Bedrooms and Hallways – sexy, believable, same and different gender attractions and fabulous other queer characters.

We’ve not yet watched some problematic classics, like Basic Instinct, Rent or Cabaret, but we will, for the historical interest. But I’m not sure I can watch The Rocky Horror Picture Show again, even though my first fancy dress party attempt as a teenager was Frank N Furter.

GLAAD keeps an eye on LGBT+ representation in US television and film, and they say we are definitely seeing more bisexual characters, with a big jump over the last four years. In 2013, bisexual men were just 1% of LGBT+ characters in film. In the last survey, bisexual people – with women vastly outnumbering men and no measure of bisexual non-binary folks – made up 30% of LGBT+ characters.

This should be good news, but GLAAD say there is still a problem with bi+ folks being portrayed as untrustworthy, manipulative and deceitful. In fact, apparently, we’re most likely to be the bad guys, which, as GLAAD points out, has real life consequences for our wellbeing.

When bi+ folks talk about biphobia and bi-erasure – when we ask that our issues get included in wider Rainbow events, groups and supports – we often get pushed back with the assumption we’re experiencing homophobia-lite. Because we can choose to be with a different-gender partner and get all that straight privilege, it’s assumed we’re not quite queer enough to belong.

Except we all know the costs of not being able to be ourselves. We can see it in our mental and physical health outcomes, the worst of all sexualities. Of all sexualities, we have the highest rates of depression, experience the most partner and sexual violence, and are the most likely to misuse alcohol and other drugs. Bi+ people are the least likely of all sexualities to be out. Not only do we face the hurt from our straight family, but too often, we don’t get the support and care we need from our Rainbow relatives either.

So, next time you get the chance, try saying biphobia out loud. Maybe when you’re talking about its siblings transphobia and homophobia. Try making it ok – truly ok – for bi+ folks around you to come out, by challenging biphobic stereotypes. Make sure Rainbow events and groups welcome bi+ folks by including us explicitly. We are here anyway, we always have been, and it would be great to know you see us. It sounds small, but the quality of our lives may depend on it.