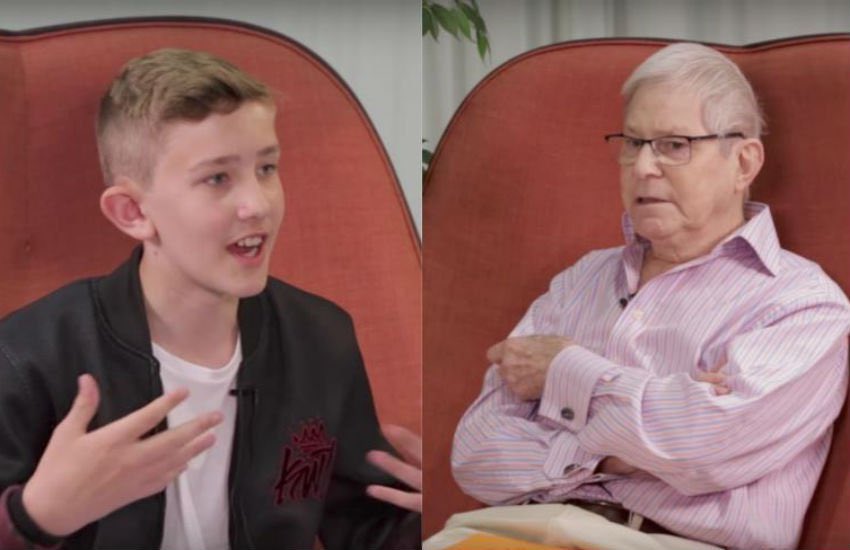 A 78-year-old gay man sits down with young gay boy, 65 years his junior, to talk about being gay in this moving and emotional video.

If given the chance, what would you want to ask a gay person 65 years your elder? Someone who grew up in a time when homosexuality was a crime?

78-year-old Percy sat down with 13-year-old Louis to reveal what it was like growing up gay when it was still considered illegal – and what difference 50 years has made on gay culture and acceptance.

The moving video coincides with the 50-year anniversary of the decriminalisation of homosexuality in the UK.

Percy says “I think you’re so lucky the world has changed and you can just be yourself.”

He reveals how he use to sneak out at night to go to gay clubs at just 16 years old, or make fake names when entering clubs so there was no proof they were ever there. He even told Louis that they were at risk of going to jail just for being gay, with police commonly raiding homes of same-sex couples. “You always had a slight suspicion that something could go wrong so you were never 100% at ease”.

In reaction to hearing this, Louis gasps and says “‘Where you said you could get arrested, I never heard that before. I never thought police would knock on your door and come in and arrest you for being gay. It’s like a shock.” He adds “It amazes me how they could even just say for loving someone, you could be arrested. That completely shocks me”.

Percy offers Louis some advice towards the end of the video, saying “Try to get people to think beyond their own immediate sphere so we can all be neighbours in the world and not have enemies and to be supportive”.

“Be true to yourself. Stand up for being gay and try to make people understand that the most important thing is that you can love somebody and it doesn’t matter who they are. Love is love.”