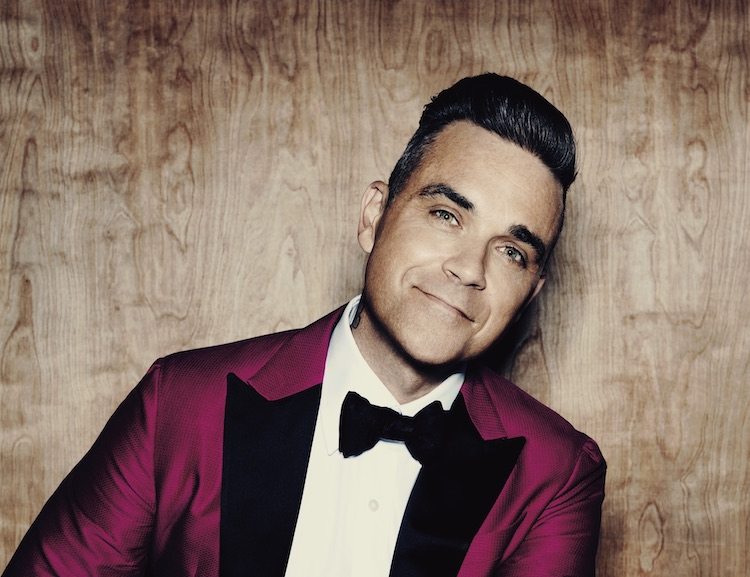 “I’m sad that people – and people will because they are people – would perceive that me suing the papers that week was anything other than to do with the fact that I could sue them… nothing to do with gay stuff, just that they were lying,”

When boy band Take That exploded in the UK music charts in the mid 90s Robbie Williams was the cheeky lad that everyone loved and arguably the best looking of the bunch. For the most part Take That belonged to lead singer and songwriter Gary Barlow, but Williams was given lead vocals on hits Everything Changes and Could It Be Magic. Take That courted the gay community to a level that no other boy band at the time would have dared. They led the 90s trend of pop acts promoting songs by performing in LGBT+ nightclubs and released a racy video for Relight My Fire that featured drag queens and member Mark Owen in a mid-rif baring cut off t-shirt emblazoned with the logo ‘Junkies Baby Powder’.

Williams left the group and launched his solo career with a cover of George Michael’s Freedom. As his popularity grew with hits like Angels and Millennium, tabloid rumours swirled about Williams’ sexuality, despite his public persona as a ladies man. Williams addressed the rumours in his flirty duet with gay icon Kylie Minogue. On Kids, Williams raps, “press keep asking if I care for sodomy, I don’t know, yeah, probably.” He continued adding fuel to fire, writing camp disco romp Your Disco Needs You for Kylie’s Light years album with his song writing partner Guy Chambers.

By the mid-naughties Williams had lost his sense of humour on the topic. Just as his tell-all autobiography Robbie Williams: Feel was being released, UK tabloid The People, printed an interview with a gay man who claimed Williams had given a blow job in the notorious cruising area in Manchester. Williams sued. In an interview with UK gay lifestyle magazine Attitude, conducted late last year, Williams stated he was saddened that some gay fans took this as an insult. “I’m sad that people – and people will because they are people – would perceive that me suing the papers that week was anything other than to do with the fact that I could sue them… nothing to do with gay stuff, just that they were lying,” he told the mag, explaining he was so frustrated with the press at the time he wanted to sue for any falsehood printed.

In this same interview, Williams also claimed to be “somewhat gay”, (a comment that drew anger from Guardian columnist Patrick Strudwick). Williams explained that he had questioned his sexuality in his early twenties. “The truth is with me and gay is that I can’t get around the cock thing… You know I have crushes. Big male crushes. A lot… But I just can’t do the cock. I don’t enjoy looking at mine that much. So, I can’t get round that bit.”

Ironically Williams will return to New Zealand on Valentine’s Day to play Auckland’s Spark Arena as part of his The Heavy Entertainment Show tour.  The flamboyant album that features collaborations with Rufus Wainwright and The Killers, is ideal for translating to stage. Packed with bawdy show pieces like Party Like A Russian, expect Williams to be strutting around the stage with his signature star swagger.