Last month, drag legend Bianca Del Rio graced us with her presence taking her ‘It’s Jester Joke’ tour to Auckland and Christchurch. The cities with left in stitches thanks to her ‘rolodex of hate’-fueled comedy. The Mean Queen’s show was dangerously un-PC and filled with mouse jokes and excessive amounts of alcohol consumption!

Meanwhile, Wellington greeted follow RuPaul’s Drag Race alumni Aja, who headlined the official Out in the Park After Party. Aja was supported by a diverse line-up of queens from around Aotearoa. The show opening and hosted by the capital’s own infamous Ashley’s, followed by eerie performances from Eva Lucian and Willy Smack ’n’ Tush. Performance of the night, however, went to Medulla Oblongata, who received a standing ovation for her emotional tribute to the victims of Christchurch shootings with a message of Muslim empowerment. 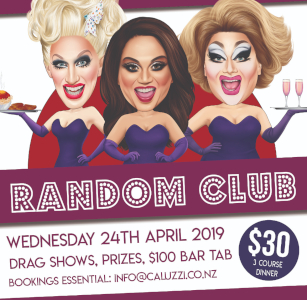 Kita and Anita’s fabulous Drag War’s returns to Auckland Pheonix Cabaret on Friday 26 April with their Easter edition. Remember to bring $20 cash for the door and collect your drag dollars in return to make it rain on your favourite performers.

At K Road’s famous drag restaurant Caluzzi be sure to check out Random on Wednesday 24 April for $30 for a three-course dinner, shows and prizes. Book early!

In Wellington, there’s a packed schedule of drag this month. Highlights include: GAG’s Bitch Stole My Brand 2 on Saturday 6 at Ivy Bar, Hugo Grrrl’s The Hot Spot: A Lip-Sync Drag Show on Thursday 18; and the epic-looking Dorothy’s Drag Show: A Wizard of Oz Spectacular at The Grand on Saturday 27 April.

Finally, be sure to check out Christchurch’s monthly drag night Drag It Out at the Lichfield Courtyard on Saturday 6 April. Hosted by Lady Bubbles and Nytemare, with a performance from So You Think You Can Drag winner Fred Ayyy and a competition where five fierce drag competitors will battle it out! May the best lip-syncer win.