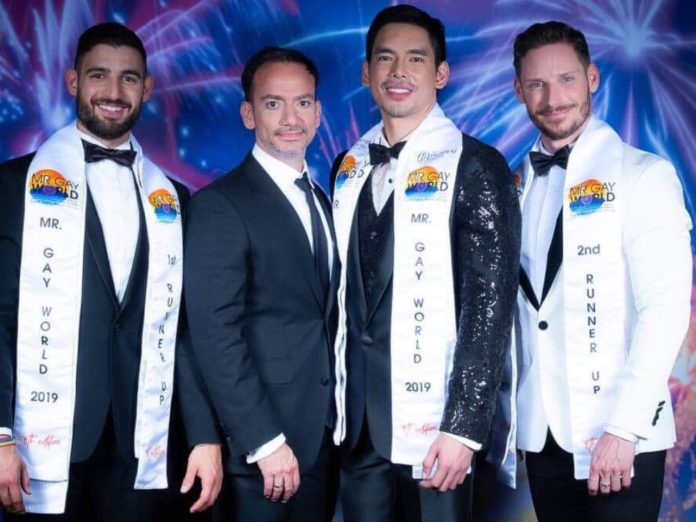 In response to the lockdown and travel restrictions enforced across the globe during the COVID-19 pandemic, Mr Gay World has joined many other large-scale LGBTQ events and had to completely postpone their 2020 event.

The competition’s finale, which has been held in South Africa for the last two years and was scheduled to again be conducted in South Africa’s Nelson Mandela Bay and Knysna this month, will now be held in March 2021 in Johannesburg.

In an extraordinary move, the 2020 finale will be held alongside the 2021 finale, creating an “Epic Finale” where two winners will be crowned.

The winners will share the stage and both reign as Mr Gay World for 12 months.

As the 2019 winner, Janjep Carlos from the Philippines has already held the title for 12 months, the organisation have again made the unprecedented move to end his reign now and pass on the title to his runner-up, Spain’s Francisco Alvarado, for the next ten months.

Speaking about the huge steps, Mr Gay World President Eric Butter said he would like to thank Carlos for his efforts.

“He did a remarkable job at last year’s event and we wish him well in his future endeavours,” said Butter.

“Francisco Alvarado will contribute and will ensure that a diverse range of projects and ideas are executed to advance LGBTQ+ rights and the community in general.

“It is unfortunate that we are postponing this year’s event to March 2021 but we will be back greater and stronger; in these unprecedented times we lead by example and by the ability to cope with change and adjust.”

Butter said the contest will take place in Johannesburg from the 21st to the 28th of March, 2021.