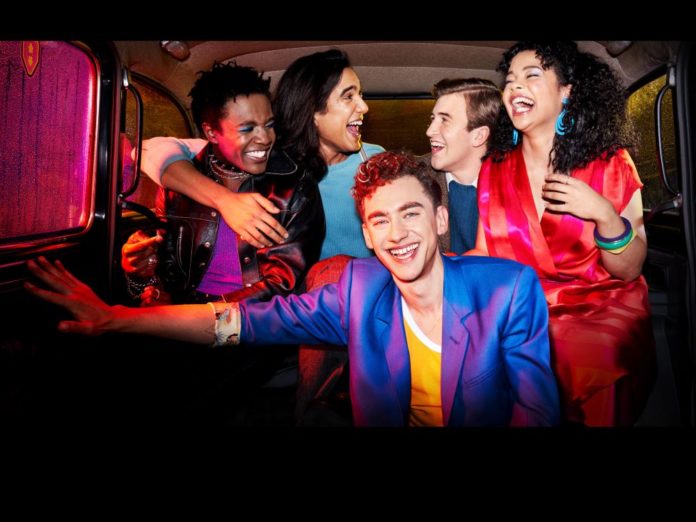 Michael Stevens immerses himself in the most-talked about gay drama in years and finds It’s a Sin, “is the best dramatisation of the early years of AIDS I’ve seen yet.”

It’s a Sin, is the best dramatisation of the early years of AIDS I’ve seen yet, and packs a strong emotional punch.

The show is set in the UK, mainly in London, starting in 1981 when a lot of the key cast members are just starting Uni, or in their first jobs and away from home, maybe 18 or 19 years old. The young gay men are joyfully discovering themselves as sexual beings, and the first episode caused complaints from the usual quarters when it screened in the UK, for its graphic but accurate displays of sex and nudity.

Watching these young men having so much fun with each other took me back to those days too. Sex was so much more innocent before HIV happened, and they’ve managed to capture that feeling really well. I remember going to a Gay Lib meeting at Auckland University in 1979 when I was 18 and half seriously being told that I should get out there and fuck, because the worst thing that could happen was an STI and they were all curable – no need to worry about babies like the straights.

The energy of that time was intensely sexual, free, and innocent. Lots of fucking – no real consequences, or so we thought. And the show captures that atmosphere so well. But knowing what we know, there is also an immense sense of foreboding about what will come.

And it does get darker and darker, as one by one friends and lovers start getting sick and then disappearing back to families, and dying. Imagine a group of friends going away together for a holiday, and a bomb goes off in the bus. Who do you help first? How do you help them? Why is nobody else helping?

The writer, Russel T Davies, has captured the era so well, in all its contradictions. While it’s not directly the same in all details as what we lived through here in New Zealand, the themes are all totally accurate.

Families did show up and take their sons home, rip them away from their friends and gay support networks, take them home to die in silence and shame. Some families went further. Our relationships had no legal recognition, so sometimes as a son was dying, they’d enter their flat and take everything, even the partner’s stuff. Sickening but true. And many men died alone, or with just a compassionate stranger by their bed.

Davies shows us the moral complexity of all this as well, especially in the character of Richie. Trying to figure out who infected who was always a fool’s game, but one many of us couldn’t help but play as we tried to understand what had happened. He also shows the heroism, the strength of love and friendship, the selfless work of so many, as well as the darker side.

There are also moments of real belly-laughs, as well as tears. The cast all spark brilliantly off each other, and you’d have to think it is a strong contender for any upcoming TV awards.

For many gay men in their 50s, 60s and beyond, this series will bring back sharp and painful memories of that time when so much of the rest of the world turned its back on us and on our suffering. We lost a huge number of wonderful men. I’ve heard and read many comments saying “Maybe now the young ones will understand what we went through.” I hope so too – it’s a central and important part of our history.

Now, who will tell the New Zealand story?