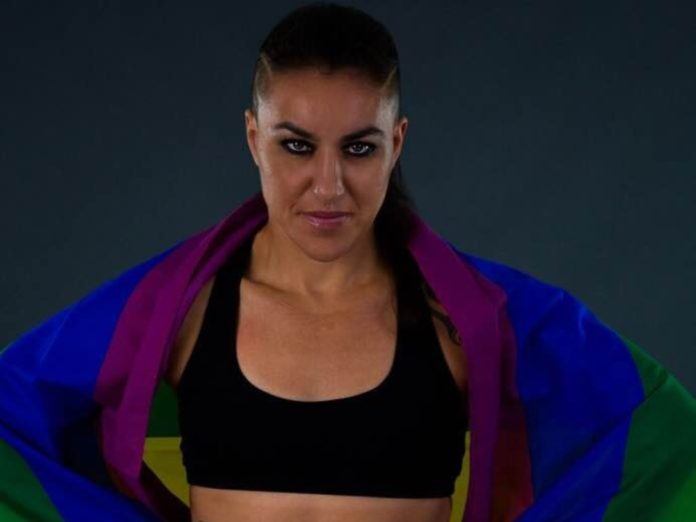 The announcement was made by Peres’ trainer Terry Reid Batchelor last week:

“Geovana Peres has now retired from boxing. I have had the pleasure of coaching Geovana Peres’s who is Fearless, mentally and physically strong, with the absolute Will to succeed. She has never been Lazy, always comes in peak physical condition for every fight.

Geovana started boxing at 38 and when she turned pro she wanted to fight anyone and everyone. After winning and defending the WBO world title, she was set to fight Savannah Marshall in England. With 3 very demanding boxing camps each fight was cancelled due to Covid19.

Geovana turns 44 in 2 weeks time, over the last couple of months we had been talking about retirement. Her main goal of fighting a big name overseas against either Savannah or Claressa Sheilds was all she wanted to do as her last fight. But with Covid that dream does not seem possible and age being a big factor, time is not on her side.

I want to thank Bruce Glozier who made the world title happen. You have been very supportive of Geovana’s career and thank you to Steve Deane  for the great work you have done to.

Thank you to Alex Sua who has helped train Geovana all through out, and to David Tua who has always given alot of support to Geovana.

And to my good mate Alexey Papyshev who has been a big influence in training Geovana’s physical conditioning and mental preparation. Thank you to Jerome Pascua for the awesome rounds of sparring with Geovana in her preparation for fights.

Thank you to Lani Daniels for always being a formidable opponent and to John Conway for being a great coach to Lani for such good fights.

Geovana wants to have a kickboxing fight as that will be her last thing she wants to do. So my good friend Tony Angelov and the Cityleegar family are now looking after her for that.

We have many great women boxers in NZ, that put their heart and soul into this game. And with Daniella Smith being the first Women’s world champion then Geovana the second. I’m sure it’s not to long before with have a third.

Thank you to: Pryme Health, Lightforce, Prep meals, Punch boxing for your sponsorship. 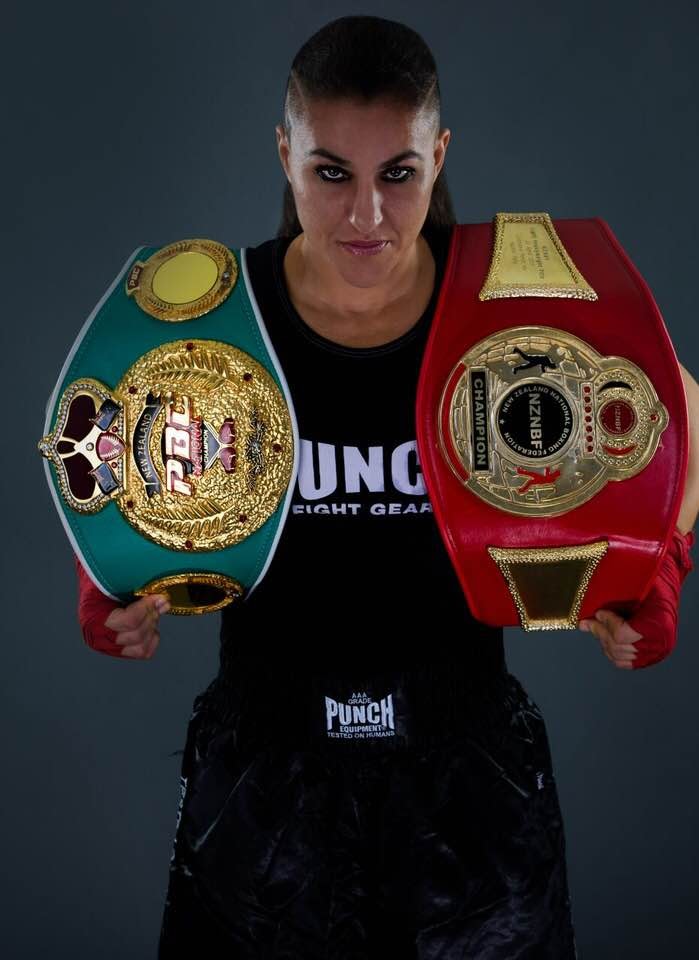 Benjamin Thomas Watt details the highlights of Peres’ career below:

Geovana Peres started her boxing career in November 2015 when she fought Teuila Laika in a charity corporate boxing fight at an event that was raising money for Canteen. Canteen if you don’t know is a charity organisation in New Zealand that support people who are teenagers to early twenties going through Cancer. Geovana won her fight with a breeze and fell in love with the sport.

The following year Geovana had her first amateur boxing fight where she fought in Taupo, New Zealand competing at the North Island Golden Gloves. She finished her Amateur and a corporate career with a total record of 3 – 0.

In 2017, Geovana made her professional boxing debut against a tough Sarah Long, who now today is ranked 4th in the world today on boxrec. Geovana had a tough challenge with Sarah Long and unfortunately, Geovana suffered her one and only loss of her career. This is where Geovana Peres met Benjamin Thomas Watt (me) the first openly gay boxing judge in the world. The two hit it off well and they became friends. 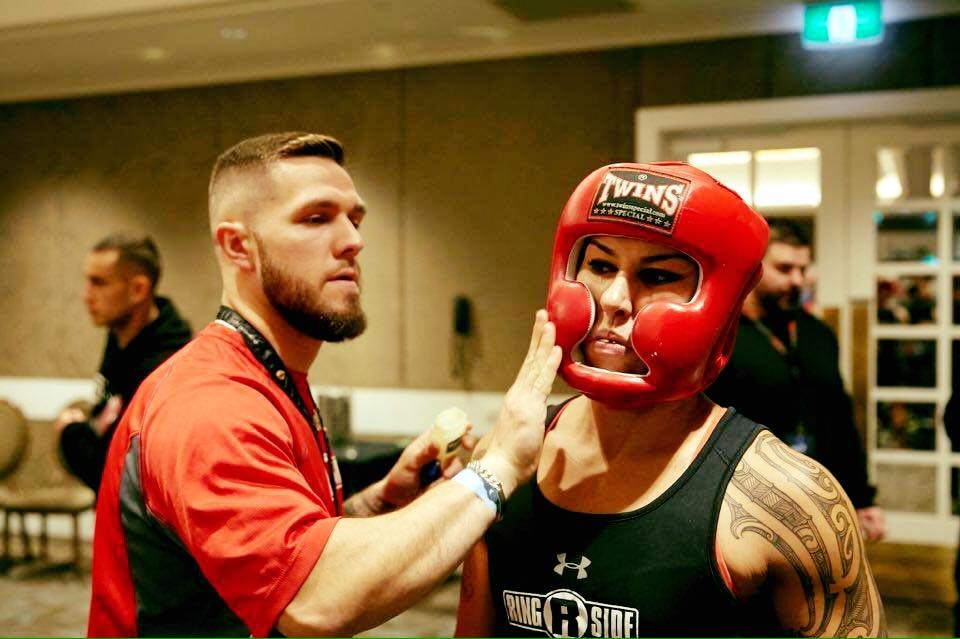 A month after she lost Geovana jumped straight into the deep end to take on Nailini Helu who at the time was ranked 10th in the world (before Nailini career started her losing streak). This was the first major stepping stone in her career as it was for the vacant New Zealand National (NZNBF version) Light Heavyweight title. Geovana did amazingly in this fight, outmatching her opponent and winning the title. This made history, with Geovana becoming the first person in the LGBTIQ+ community to win a professional New Zealand national title.

Geovana went on to have a keep busy fight against Tessa Tualevao, which would end up being the first of two of their fights. This was also the one and only time Benjamin Thomas Watt judged her fight. Geovana won the fight as Tessa was still only 18 and inexperienced. After the fight, Benjamin decided to sign on to Geovana’s team and becoming her marketing manager.

Geovana already having a busy 2017 jumps back into the ring to fight for another title but this time she takes on Trish Vaka and for the vacant New Zealand National (PBCNZ version) Light Heavyweight title. This was also the first of two fights against Trish Vaka. Geovana again just simply dominating the fight won the title and again making history by becoming the first women to win the New Zealand National title from two different commissioning bodies.

Geovana ended her 2017 with a tough challenge against Tessa Tualevao. This time this fight was a lot closer than the first. Tessa throwing a lot more punches and landing more cleaner and heavier hits. But Geovana experience and her harder punches kept her on the winning edge. After this fight, Tessa Tualevao became a regular sparring partner with Geovana, especially later in Geovana career. Tessa Tualevao now is ranked 4th in the world in the middleweight division on Boxrec. After this fight was where the world saw Geovana when she received her first World ranking with major sanctioning bodies, including WBA. A quick note, this was the last professional boxing fight for Referee Isaac Peach officiating career before he focused all of his time onto training his boxers.

You can watch that fight here.

Her next fight was another massive step of her career when she took on the toughest Women’s boxer in New Zealand, Lani Daniels. This was Geovana’s first New Zealand title defence for her PBCNZ title. This was the closest fight of her career and definitely one of the toughest. This also was the first of the two fights they had which would end up being the biggest New Zealand women rivalry in New Zealand Boxing history. The fight ended with a close Split Decision win to Geovana Peres.  After this fight, Geovana Peres announced that she had officially become a New Zealand citizen and holds the New Zealand & Rainbow flags proudly on her shoulders. 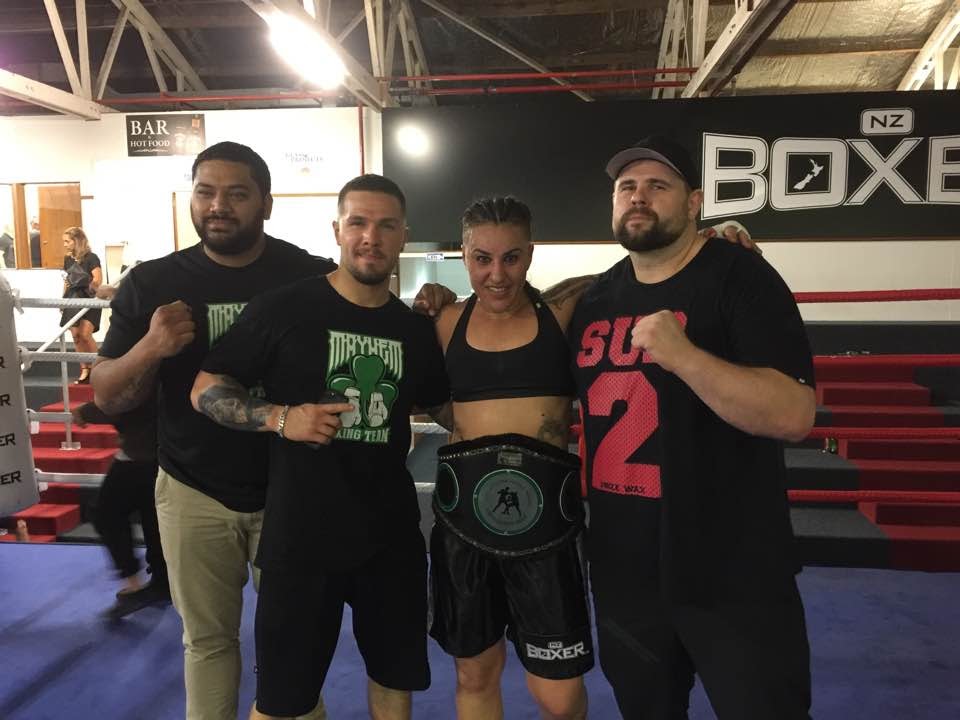 After an easy warm-up win against Trish Vaka in December 2018, Geovana got the number 1 ranking in WBA becoming the mandatory challenger for the vacant World title. Due to this Bruce Glozier, Geovana regular promoter decides to make a major risk by putting on the rematch between Geovana Peres and Lani Daniels for the vacant and Inaugural WBO Light Heavyweight title. This had never been done before between two New Zealanders and it was only forth time a major world title was held on New Zealand soil. It was televised on Sky TV and it competed to a sold-out audience at Sky City Convention Centre. Geovana Peres won the world title in one of the most exciting Women’s fights in New Zealand history. Geovana also made history by becoming the first LGBTIQ+ person to represent New Zealand that won a major World boxing title. Lani Daniels went on to become ranked number one boxer on Boxrec in the heavyweight division today.

In her last fight on her career, she defended her World title against Canadian boxer and world ranked number 1 boxer, Claire Hafner. To advertise for the event, Geovana did a major publicity stunt by training outside on the Auckland Sky Tower at 186 metres in the air. You can find that here.

Geovana put on a stunning performance against Claire Hafner, cutting both of Claire Hafner’s eyes throughout the fight and eventually ended the fight by referee stoppage, making her world title defence the first Knockout of her career. Geovana team were happy with the result but disappointed with the opponent as she didn’t produce the quality that she promised.

Now we are at the end of Geovana career she has accomplished so much. She is a role model for both women’s boxing and the LGBTIQ+ community. She set her goals and conquered them. And now she can say she ended her career as World champion.