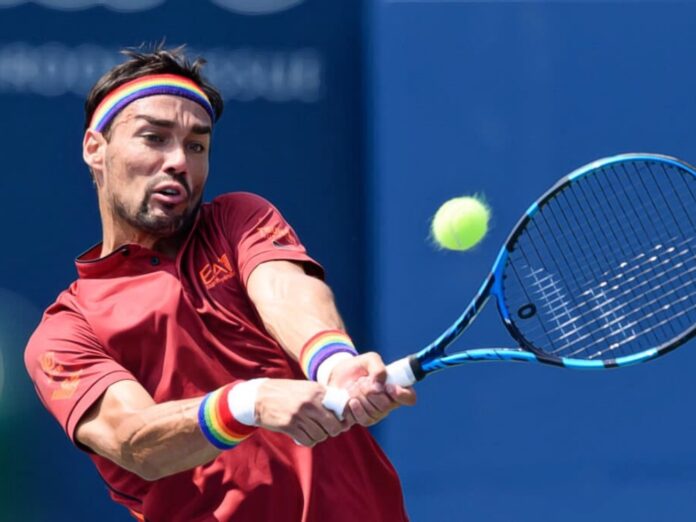 Fognini, who was widely criticised for repeatedly yelled a homophobic slur after being defeated in the Olympics men’s singles against Russian Olympic Committee player Daniil Medvedev on the 28th of July, has appeared in both a rainbow headband and wristbands for his first-round match at the ATP 1000 event in Toronto, Canada, on Monday the 9th of August.

Seen as an attempt to hide his homophobic actions, Fognini who following using homophobic slurs also slammed his racket on the court before throwing it into a rubbish bin has been condemned across social media.

“Fabio Fognini threw the first brick at Stonewall,” another tweeted.

Following the incident, Fognini did offer an apology in a rainbow-themed post on his Instagram Story, however, appeared to simply blame Tokyo’s hot weather for his homophobic mouth, saying that the hot conditions “affected” his “head”.

“Obviously, I didn’t want to offend anyone’s feelings,” Fognini wrote. “I love the LGBT community, and I apologise for the nonsense that I let out.”

This is not the first time Fognini has been in hot water. Similarly at the US Open in 2017, Fognini was kicked out of the doubles tournament for shouting obscenities at a female umpire.

According to the Guardian, the Swedish umpire Louise Engzelle heard Fognini call her “troia” and “bocchinara” in Italian – which translates as “wh*re” and “c*ck sucker” in English.

Fognini received three fines from the ITF for his behaviour at the tournament totalling $24,000, he was also suspended with a ban of two Grand Slam tournaments.