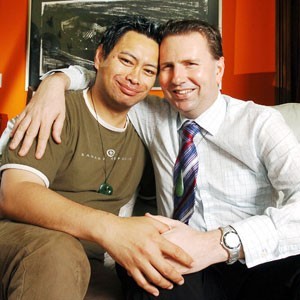 Yesterday marked the 10 year anniversary of civil unions being passed into law by the New Zealand parliament. Former Labour MP Tim Barnett was the face of the Government’s bill and spoke to Levi Joule about the significance of the 2004 Civil Union Act.

Barnett tells us that the civil unions bill came about as a result of the then Labour government wanting to improve the lives of GLBT New Zealander’s and offer a form of legal recognition for same sex couples.  “In terms of the model, we looked around the world and we looked for a model which would give people equal rights under the law and would be open to everybody.”

Ultimately civil unions was proposed and introduced as a government bill to parliament in early 2004.

The push for civil unions rather than marriage equality was not initially welcomed by all however.

Barnett says there was some opposition from within the gay community at the time to the civil unions bill, “with some saying it was not really full equality. Emotionally, it was hard to disagree with them.” However he says that there was no chance marriage equality would pass in the time of the 47th Parliament. “that parliament wouldn’t have supported marriage equality. civil unions only got through with 10 votes in the end. ”

Barnett also adds that it was very much a case of civil unions or nothing at the time.”Given the attitudes of the National party at the time, it was unlikely that had they won (in 2005) they would push through anything better.”

Did he think the 2004  Civil Unions Act would always be sufficient? Barnett tells us that “opponents asked if this was a stalking horse (for marriage equality) and I said at that time, no, that’s not where I’m coming from, but I’ve changed my mind overtime. The actual rights that people got was the important thing. Civil Unions gave people the same rights as marriage, but as time went on, the global mood got stronger and stronger for full marriage equality.”

Marriage equality in New Zealand would ultimately be achieved in 2013 as a result of Louisa Wall’s Marriage (Definition of Marriage) Amendment bill.