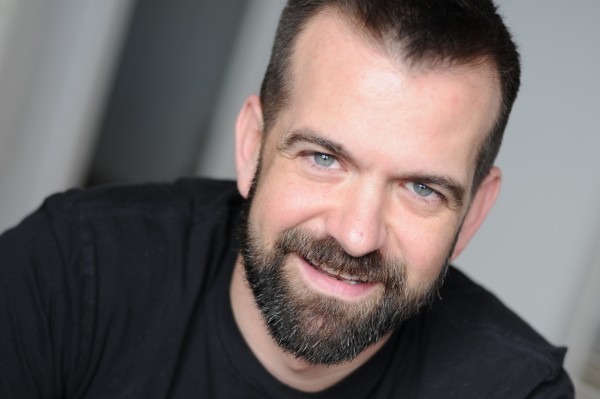 We’ve had a lot of fun getting to know the community comedians who’ll be splitting some sides at the up and coming International Comedy Festival. In the final of the series chat with sexy bear Neil Thornton, and naturally we enquire how he would cope with the now legendary second anus!

Hard to choose, but one of my favorites jokes is by Emo Phillips: “I got in trouble once on a date. I didn’t open the car door for her. Instead, I just swam to the surface.”

Don’t tell him I said this, but with that beard, Dai Henwood is totally my type of pocket bear cub (also known in the bear comminity as an ewok). Don’t tell my husband, either.

Bearly Kiwi is a solid hour of hard-hitting fast-paced comedy. My husband and I moved to New Zealand a year ago, so it’s loosely organized our first year here, so expect comparisons between America and New Zealand (New Zealand wins), but I’ll also be making fun of lots of other things: gay married life, homophobia, awkwards gigs in small towns, bear culture, and lots more!

I love making everyone laugh–male and female, gay and stright, twink and bear, and everyone in between or uncategorized. But I need my LGBTQI people in the audience! After doing gigs for 40 confused sheep farmers in Winton, I’d MUCH rather have a big queer audience any day–or at least a contingent to laugh at the jokes the straights don’t get.

I’m not giving that away, but you’ll learn some new things, maybe the definition of “cockshot?” I will tell you this: I once told a joke so dirty I made the audience at a gay nudist colony gasp.

For wit and lessons in comedy: Oscar Wilde, Harvey Fierstein, and John Waters.

For general awesomeness of being: Neil Patrick Harris.

For eye candy: a shirtless Hugh Jackman (I know he’s not gay, but he can pretend).

Cosmopolitans, martinis, manhattans, pinot noir, champagne…Did you think we’d eat? Ok, I might get a steak for Hugh. He could eat it with his bare hands and then I’d lick the juice off his…. wait, what were we talking about?

… if one day homphobia is considered as laughable as believing the earth is flat. If not that, then maybe if I can feed Hugh Jackman a steak.

1) Do something thrilling you’re scared to do (bungee jump off a bridge, go to a leather party, try stand-up comedy)

2) Spend a whole day doing nothing productive and refuse to feel guilty about it.