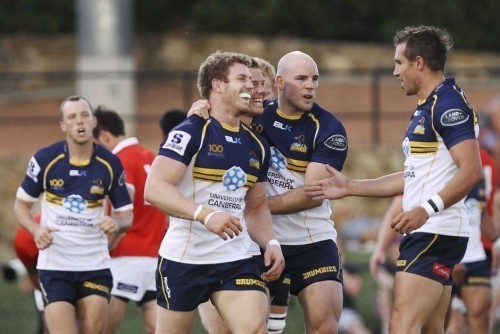 The $20,000 fine handed out to Waratahs player Jacques Potgieter has been applauded by the Sydney’s gay rugby team the Sydney Convicts, who have welcomed Potgieter to join them for some training sessions.

NSW Waratahs player Jacques Potgieter has been given a $20,000 fine for using homophobic language during Sunday’s game against the Brumbies.

Potgieter’s penalty relates to a breach of the ARU Code of Conduct, which prohibits homophobic or racist comments.

Audio from Sunday’s game showed that ‘faggot was used twice against other players. The comments were first pointed our by Former Wallabies captain and current Brumbies player David Pocock

Andrew Purchas, founder of the Sydney Convicts and President of last year’s Sydney Bingham Cup, played a lead role in coordinating an historic, joint commitment by all the major sports, including the Australian Rugby Union, to eliminate homophobia in sport in April 2014. One of the overriding objectives of the “inclusion policy” which the sports signed was the ‘eradication of homophobic actions, discrimination, abuse, or harassment on the basis of actual or perceived sexual orientation.’

Said Andrew Purchas, “We applaud the Australian Rugby Union and the Waratahs for acting so quickly to investigate and resolve this matter and reinforcing their commitment to eradicate homophobia in rugby and providing a positive environment for all. It is certainly disappointing that this event occurred at all and it highlights the ongoing need for all sports to be actively engaged in eliminating homophobia.”

Purchas continues, “It is only relatively recently that Australian sports have started to focus on elimination of homophobia. To achieve the change required it will be an ongoing process and it will require commitment from the top down and the grass roots up. We applaud David Pocock for speaking out when he heard these comments. He is a great example for all athletes, coaches and officials. It is critical that people speak up when they hear homophobic comments and make it clear this kind of language is unacceptable.”

Robert McPherson, president of the Sydney Convicts, said “The homophobic slurs made by NSW Waratahs player Jacques Potgieter are very disappointing and have no place on the sporting field. We often find that people using this kind of language don’t fully understand the harmful effects it can have on those around them, particularly those struggling to accept their own sexuality.”

McPherson continued, “We would welcome Jacques to come down to meet the boys and hear their stories, which is why we will invite him to join us for a few of our training sessions. He would quickly recognise that being gay has no impact on a person’s ability to play rugby or their passion for the game.”