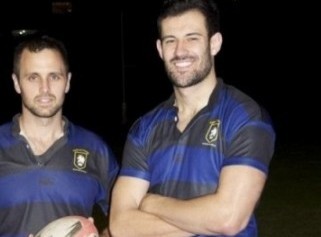 Since the Falcons creation in 2013, the club has gone from strength to strength. The past two years have seen membership grow as well as public interest and community support.

Last year the team competed at the Bingham Cup in Sydney, playing six games of rugby over three days and winning the Bowl final – not bad for a team that was competing in the tournament for the first time.

Jeremy Brankin was a part of the group that got the Falcons going in 2013. He tells express that he was “looking to get back into team sport… The fundamentals of the Falcons are that we are a gay and inclusive team. There is a lot more social bonding than there might be with other teams.”

Karl Wishier, age 24, joined the Falcons in 2014 having never played a game of rugby before. “I just had a friend who was a ref who dragged me along for a practice.” Karl has been playing ever since.

He says the socialising that the team provides in addition to the game was a big incentive for him. “To me it’s a combination of a great social scene and also I can’t think of a bigger challenge as far as a sport goes. It’s incredibly rewarding getting through every game.”

Karl says there are a number of players in the team who have never played rugby before, so inexperience in the game should be no barrier to joining.

The Falcons play in a social grade, which Karl says is a good mix given the range of experience within the playing group. “It’s still incredibly challenging at that level.”

Following on from their success at last year’s Bingham Cup, the Falcons will be hosting the The Purchas Cup in September where they will be up against some of the most competitive teams on the Australian gay rugby scene.

“Gay rugby is certainly on the rise within our community, especially after the first Bingham Cup.” Karl says, with the team’s success in Sydney generating more interest than ever before. “I’m really encouraged to see the people who join and stay.”

Sam Learmonth says that he really wanted to play rugby at school, but for a number of reasons didn’t. “I’d played lots of other sports, but not rugby. I think it combines a good physical game and a really great team sport. It’s quite unique in Kiwi culture.”

When he was invited to try it out, he said he felt the Falcons was a team where, “he could be himself.” He also notes an increase in his fitness level since starting with the team.

The Falcons also run two touch teams, with one in summer and one in winter, so those wanting to play a less intense version of the game can participate. Sam says that the age range of the group is from those in their early twenties through to late thirties.

Thinking of getting involved? Sam says “come down and give it a go. It’s a really great bunch of supportive guys that are more than happy to show you the ropes.”

Jeremy agrees and says those interested should watch a game on Saturday, join the team for practices and  put aside how they may have been treated in the past with other rugby teams, “If people had been hesitant in the past because they thought being gay was an issue, this is the team for you!”

Anyone keen to join the team should visit www.nzfalcons.org.nz for more details or email nzfalcons@gmail.com.

Gay Man Refused Entry to UK Restaurant Because of His Pants!

50 Years of An Icon: All-New Range Rover on Its Way to Aotearoa