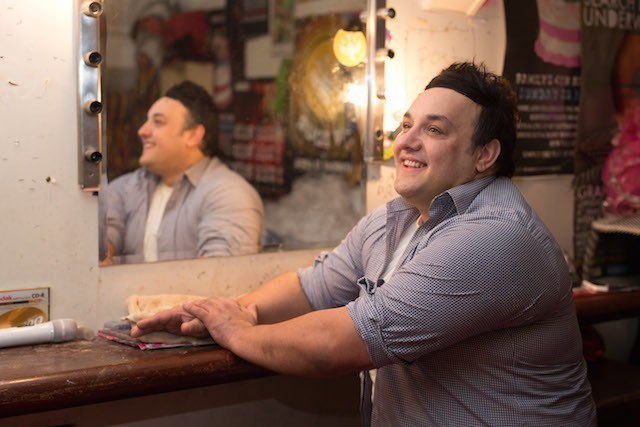 She’s New Zealand’s most well known drag queen, but what is she like outside of the costume and wig? Levi Joule traveled out to Kelston to try and uncover the real Miss Ribena

Most people would have no idea who Kevin Dunseath is. His drag persona, Miss Ribena however is legendary. Is there much of a difference between the two?

What may be of surprise is that Kevin is a remarkably simple man. He lives in a two-story unit in Kelston with flatmate Bim and apart from the rainbow flag that hangs in the kitchen; there is really nothing much gay about it – a far cry from Family Nightclub, where Ribena spends her Friday and Saturday nights wearing outlandish costumes while shouting out her standard “gay power” slogan in the most fabulously ear piercing tone known to man.

Kevin has been doing drag full time at Family since it opened in 2005 as well as what seems like every other gay event that has been held in New Zealand since then. Kevin spends the first 20 minutes of the interview rattling through these events, with the next 20 minutes spent going through his impressive array of awards – this is a man very proud of his work.

Kevin’s not boastful as such, but he’s no shrinking violet ether – at one point in the interview, he proudly proclaims “When people think of drag in New Zealand they think of me”

So where did it all begin? Kevin Dunseath grew up in Hamilton; he is the adoptive son of a born again Christian family who thought he was possessed when he came out as gay.

“I was brought up in a Pentecostal Christian family. Pentecostal! It was extreme.” Kevin says. “When I came out they told me that I needed to find my birth parents and that if I did, my homosexuality and cross dressing would stop” He did eventually find them, but of course it didn’t change anything. Plus, his birth parents  accepted him completely.

Kevin abruptly finishes talking about his background and lights up a cigarette. It becomes clear his upbringing is not the easiest of topics to discuss.

The express interview takes place on a sunny Friday afternoon, Kevin had just woken up from a nap and was preparing for a friend’s partner’s 40th birthday party, before the usual Family Bar gig later on. The friend as it turned out was Carmel Sepuloni – the local Kelston MP.

“Carmel’s a friend of mine” Kevin explains. “She comes up here and has a glass of wine from time to time”

“I vote Labour. The reason I vote Labour is because number one Helen Clark was on the sidelines at the 1998 Hero parade, number two – Labour was the party that pushed through homosexual law reform, civil unions, the marriage equality bill… for me being an out, gay performer – Labour is my only choice”

Kevin has been an out, gay performer for the past eighteen years, he says he was first introduced to drag in 1997 after “meeting two bears at Staircase bar.”

“I went back to their house in Ponsonby. I thought this was a bit dodgy, but there was an amazing costume on the floor of their villa. It was this huge acrylic floral thing, it was beautiful. I picked it up and it all started from there really”

Despite the hesitancy to officially start performing in 1998, drag had always been something that had lingered in the back of Kevin’s mind. “I started dressing up in dresses when I was five.”

It wasn’t long after Kevin first put on that acrylic floral dress that he began working for businessman Wayne Clark at a number of gay bars in High Street, then moving up to K Road and Family Bar, where Ribena has become an institution and a key part of the bar’s success ever since.

Ribena is an institution not only in New Zealand, but in parts of Australia as well, something Kevin’s flatmate Bim highlights when he talks about their trips to Sydney, saying it can take the pair up to one hour to walk just 100 metres down Oxford street, “everybody just wants to stop and have their photo taken with her. The traffic on Oxford street will come to a standstill” Bim says.

“It’s because there are no other drag queens that do the things I do” Kevin adds – no shrinking violet that’s for sure.

What is Ribena’s relationship like with the other drag queens on the Auckland scene? “There’s a lot of jealousy” Kevin says. It doesn’t faze him much though, “for every person on the gay scene who hates me, another 100 love me.”

Kevin says being Ms Ribena is a job, but while interviewing him, it becomes quite apparent it is more than that. The lines are a lot more blurred than Kevin might want to admit publicly. While some drag queens may have very clear boundaries between private and public life, it seems that Kevin revels in his Ms Ribena persona, living it out in every day life as well. After the interview I asked a close friend of Kevin whether he thought there was any real difference between Kevin and Ribena, he laughs and replies “no comment.”

The house and everyday living might not be  as glamorous as one might imagine it to be  for New Zealand’s biggest drag queen, but all of Miss Ribena’s personal traits, from the iconic voice, to the remarkable ability to make almost anybody laugh –they’re all central attributes of Kevin Dunseath as well.

Kevin is every bit the entertainer that Miss Ribena is.