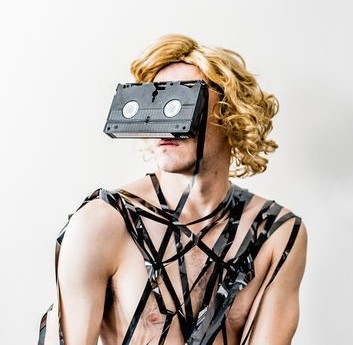 Every second day of the year, a child is admitted to a New Zealand hospital suffering from the injuries of assault, of neglect, or other maltreatment.

Fifty percent of those children are under 5. Ordeals survived by such children cause them to juggle with sanity.

For the children of Bob Dylan’s “wounded flowers…dangling on the vine” (Aint Talkin’, Modern Times, 2006), life can be a terrifying struggle to find emotional and often physical safety. This is the context for Benjamin Henson’s brilliant new play, Not Psycho.

There is nothing ordinary about this play: its soundtrack alone flings the audience into Matthew’s world, filled with sneering violence, pounding fear, psychotic conversations and fearsome challenges to his reality.

“After the success of Titus, and Earnest, we were trying to think strategically about where Fractious Tash could go next. A question snagged our attention – do violent films make people violent? That probably was the trigger for the play,” say Benjamin Henson.

Donogh Rees gives a commanding performance as his sex-worker mother whose main buffer against the horrible realities of her situation is alcohol. Continually calling her adult son ‘babe’ and reaching out to him, as he does to her, she nonetheless sends such mixed messages to him that she scrambles his shaky grip on reality.

The play is a demanding one, flitting between Matthew’s child and early adult experiences and his nightmares made by them. These are heightened by his addiction to horror films, particularly those of Alfred Hitchcock, sourced from the video shop he and his mother live above.

At about five years old, child-Matthew is mentally seared by being in the room when his mother and a client (a menacing Kevin Keys) are having rough and vocal sex. He is further harmed by the man’s expressed anger at the child’s presence. In treating his mental trauma, a frighteningly pleasant nurse (an excellent Julia Croft) drills into adult-Matthew’s skull, her singlet as red as the blood she could shed. Later, Matthew undergoes ECT. Both are once-common treatments for what we call madness.

In his own reality, Matthew finds it terrifying to cope with his compulsive attraction to a knife-obsessed psychotic young intruder, played convincingly by Virginia Frankovich.

The minimalist set uses the chill of clinical chrome to echo the chill and danger of the utterly absorbing script.

“Fractious Tash is deeply appreciative of Q Theatre’s support, both in helping develop the play for staging, and wanting it performed at the Loft. The amount of help both the actors and I have had from Q was overwhelmingly generous.”

The title of the play is clever – it is NOT ‘Psycho’, Alfred Hitchcock’s study of the madness of a knife-wielding murderer, which gets recurring mention in the play. But its brilliance lies in taking us into Matthew’s world, seeing it from his only-child who loves his mother point of view. The drama, which is considerable, comes directly from the conflicts in Matthew’s psyche, irrevocably affected by emotion.   Not Psycho, an important, ground-breaking play runs Tues – Sat until 29 August.