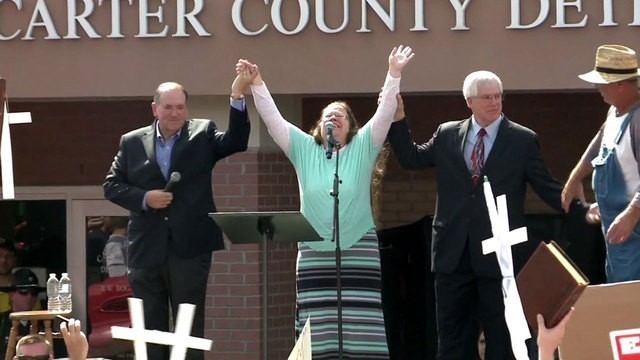 Kim Davis, the Kentucky clerk incarcerated for refusing a court order to issue marriage licenses to same sex couples has been released from jail.

David was accompanied by Republican presidential candidate Mike Huckabee spoke to the hundreds of supporters who rallied at the jail in Grayson, Ky. “I just want to give God the glory. His people have rallied, and you are strong,” she told the crowd, her arms held high in a V-for-victory gesture.

Davis has been released on the condition that she does not interfere with her deputy clerks issuing marriage licenses to gay couples.

How long Davis will remain out of jail for is unclear, with one of her lawyers saying Davis has no intention of changing her position and would continue her legal fight.

“Kim Davis cannot and will not violate her conscience,” said Mat Staver, founder and head of Liberty Counsel, the Christian law firm that has represented Davis. Staver wouldn’t discuss whether Davis will issue the licenses and told reporters, “You’ll find out in the near future.”