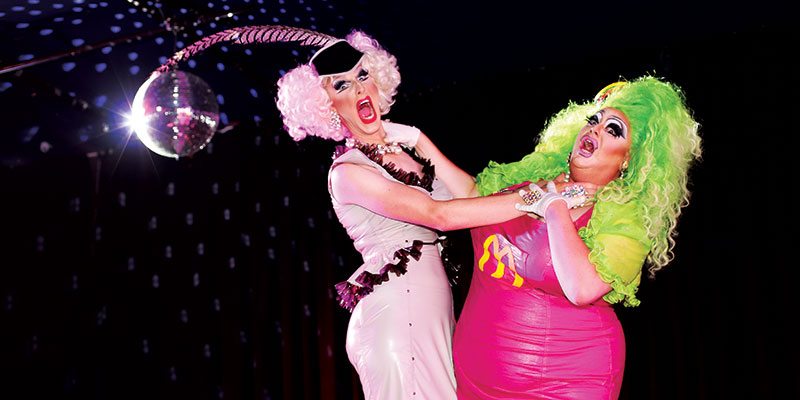 I’m going to let you finish Kimye, but Kanita is the greatest power duo of all time! Whip-smart and boisterously brassy, this delectable drag dyad has been tearing up the scene with their brawny banter, masterful showmanship and razor-sharp eye brows.

Kita Mean and Anita Wigl’it started performing drag six years ago, and what a way they have come! Now fan favourites, these quarrelsome queens are known best for their comedically cutting style of drag artistry.

“We started doing drag about six years ago respectively. We met at Family a few times and realised we had a lot of the same ideas and the same goals so we started creating events together” comments Anita in an interview with express.

Although both Kita and Anita work full-time jobs by day, it is quickly evident that drag is more than just a pastime. “If I could do drag all day, every day – I would,” comments Kita, with Anita’s enthusiastic agreement, “Drag may seem frivolous and crazy, but we take it very seriously.”

In the changing landscape of drag, Anita comments that people are beginning to see that there is more to it than quick wit and killer contour. “You are a choreographer, you are a make-up artist, a costume maker, a business person. There are no boundaries.”

Kita attributes RuPaul’s Drag Race with opening drag up from an underground vocation to a legitimate, multi-facetted art form. “People know now that drag is more than a glitter eye lid. We don’t have to be cookie cutter drag queens. We aren’t pigeon holed anymore.”

Closer to home, it was the support of the existing drag community in New Zealand, particularly the mentorship of Tess Tickle, that gave Kita and Anita their big breaks. Now, they are giving back to the art with Drag Wars, a chance for rising drag artists to strut their stuff in front of a live audience!

“Drag Wars is about providing a safe space for people to perform. There are so many new drag artists coming up, so we thought why not create a competition for them!” comments Anita, expressing the duo’s desire to foster the dreams of the next generation of drag superstars.

You can also catch Anita presenting Shameful Stories with special guests at 11.30pm every Friday at New Zealand’s favorite gay venue, Family Bar!  Keep an eye out for Kita too, who often lights the stage on fire during the 1am drag show!

Now in new premises at Encore Cabaret, Drag Wars is the most fabulous Friday night you can have with your pants on! Join Kita Mean, Anita Wigl’it and a myriad of budding drag divas on Friday 8 April for an unforgettable evening of flamboyant fanfare!