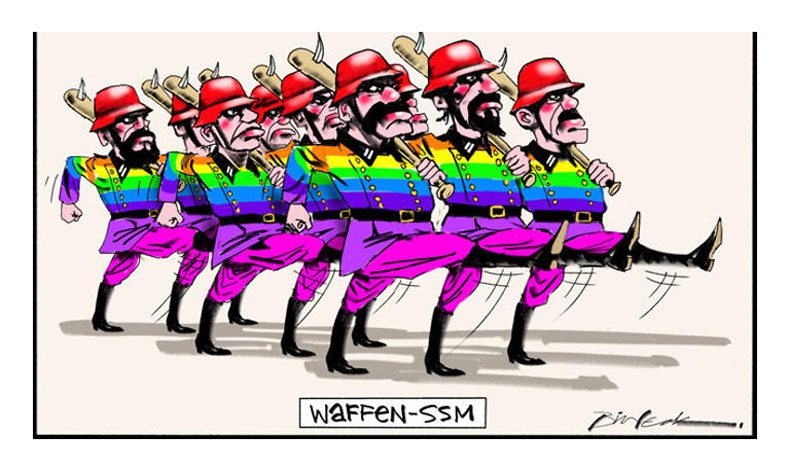 The Australian has recently published a cartoon by Bill Leaks depicting goose-stepping Nazi soldiers in rainbow-coloured uniform. The caption underneath reads “Waffen-SSM”: a play on the Waffen-SS, who were an armed faction of Hitler’s SS responsible for running the concentration and extermination camps of Nazi Germany, and same-sex marriage (SSM).

It is obvious that the point of this is to illustrate Leaks’ thoughts that the plebiscite and push for marriage equality as being pushed by LGBT+ advocates in a military-like manner. There is no question that this has gone past the point of controversial to being universally decried as offensive.

A similar situation arose earlier when Leaks published a cartoon of Aboriginal Australians last month, with Leaks saying that opponents were “sanctimonious Tweety birds having a tantrum”.

David Pope, cartoonist of another prominent Australian newspaper – The Canberra Times – threw his own outrage into the mix, tweeting about Richard Grune, a gay cartoonist famously imprisoned by the Nazis.

Hey kids. Today’s lesson is on drawing, Nazis, and homosexuality…

Grune survived the Nazi campaign of “extermination through work” and made lithographs of his experience in the camps pic.twitter.com/5750OPPqPC

Between 5,000 and 15,000 gay men were interned in Nazi camps pic.twitter.com/nutSafhjfV

Leaks may want to apply some ice for that final burn.