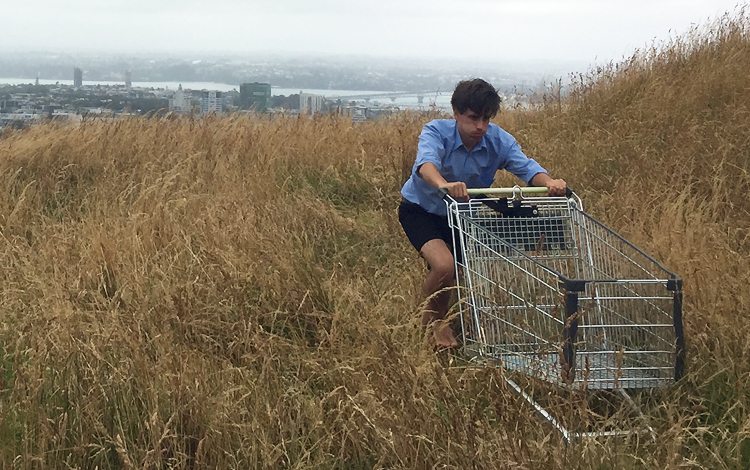 With all the excitement surrounding the Auckland Fringe Festival, we found ourselves talking to creator and theatre mastermind Ben Anderson as we picked his brains about his upcoming show The Last Man on Earth is Trapped in a Supermarket.

Inspired by having shown up to his supermarket job one day and being the only one there – following yet another world-ending prediction – Ben Anderson brings us his creation aptly titled The Last Man on Earth is Trapped in a Supermarket, whose first draft of the show was scribbled on a brown paper bag from the fish department while he was “supposed to be cleaning shit”.

The story follows Tom – your regular loser who even when the apocalypse takes place, he’s not invited. As we witness the delirium of Tom attempting his escape from Countdown, Anderson showcases what American playwright Eugene O’Neill called ‘the sickness of the world’ – the things doing us damage that need to be talked about. The Last Man on Earth is Trapped in a Supermarket is really about the awful loneliness we all feel. Sometimes its temporary and sometimes it’s permanent, but it’s always awful.

In terms of what the audience can expect from the show, although it seems to start off a bit sombre, it’s not all doom and gloom, so don’t be disheartened. The message within is ultimately positive and realistic – urging us to ask ourselves to assess the level of community and connectedness we allow for in our lives. For those of you who are all about the visuals, you haven’t been forgotten! Did we mention that there are puppets?! When asked how on earth this incorporates into the show, Anderson doesn’t want to give too much away but says, “Think Pixar, with puppets and swearing!”

Being able to showcase the show at Auckland Fringe Festival is also quite exciting for Ben. “I love everything about Fringe. It’s a great platform for artists to make work without the normal financial pressures and constraints that come along with theatre making.” He continues, “It’s great to band together with other independent theatre makers and devoted audiences under the umbrella of the festival – the sense of community is very strong and it’s something I love to see in the world”.

When asked about what we can expect from Ben in the future, it doesn’t seem like he will be slowing down anytime soon. “My brain is always buzzing with ideas! I’ve just spent four months studying traditional clowning, bouffon and mask with John Bolton in Melbourne”. For those who are just as clueless as I was when hearing this, a quick Google search told me it is the act of making a parody of the audience, so watch out!

The Last Man on Earth is Trapped in a Supermarket runs from 21–25 February at Loft, Q Theatre as part of Auckland Fringe Festival. Tickets are available from www.qtheatre.co.nz or by calling (09) 309 9771.