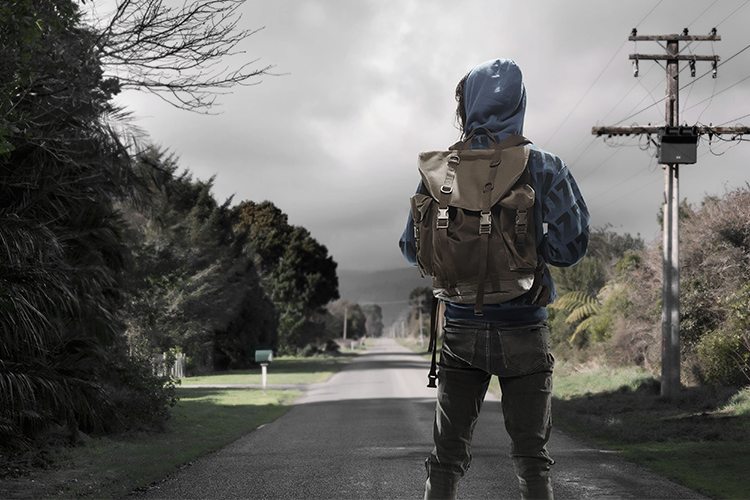 Directed by profound Kiwi actor, Rawiri Paratene, and performed by Auckland Theatre Company, the play explores how identity, isolation and abandonment can shape our life experience.

express sat down with Kiwi actors, Emily Campbell and Joe Dekkers-Reihana, to talk about themes, inspirations and most importantly sharing New Zealand stories.

Firstly, tell us about the show!

Emily: It’s part murder-mystery, part family drama, part mythlogy. It’s centred around a tearoom in a small rural town. The disappearance of two backpackers forces them to question everything and everyone they know, including themselves. There’s a very dark feel to the play which, combined with the ‘who-dunnit’ aspect, makes for a nail-biting piece.

Joe: I’ve worked with this script before on two occasions and both times it has felt very different. For me, it’s a story about a small town haunted by the disappearance of two German hitchhikers.

Tell us about your characters?

Emily: Francie is the only customer at Isaac’s tearooms where the bulk of the play is set. She’s constantly on the run both figuratively and literally. Francie is pretty volatile and impulsive, and is known to be suspicious and manipulative.

Joe: I’m playing Declan Kopu who has had a hard life. He bounced from foster homes to distant family members, and at one point was even traded for a washing machine. He never learnt to read nor write, and lacks any sense of belonging.

How do you think the play is relevant in today’s society?

Emily: Issues of isolation and abandonment are present in both the play and in society. Particularly with social media becoming such a huge part of how we function, it makes us question our sense of identity, self worth, and what we measure ourselves up against.

Do you think it’s important to tell New Zealand stories on stage?

Joe: Yes! We need that to be the standard. I’ll be happy when it’s hard to find a story that isn’t one of ours. After all, if we don’t tell New Zealand stories, who will?

Why did you want to be part of the show?

Emily: I remember reading the script and not being able to put it down – every page had me hooked.

Joe: Rawiri told me he was directing a show and asked me to audition. When I found out it was Sun and Moon, a play that I’ve worked on before but only ever performed three scenes, I knew I could finally finish the job I started seven years ago.

What’s it like working with internationally regarded actor, Rawiri Paratene?

Joe: This will be the third time I’ve worked with Rawiri and the first time with him as the director. He is an amazing man. He is strong willed, kind and welcoming. He’s an inspiration to me.

Who are your inspirations?

Emily: I’m inspired by my friends in the arts making their own work. It’s inspiring and empowering to see bold artists creating and busting their guts to make bad-ass work.

Joe: I’d have to say my mum and my friend, and mentor, Willam Wassenar.

Why has Auckland Theatre Company decided to revisit this particular story on stage?

Emily: It’s a story that is so enthralling on a highly dramatic level, but it’s also a very human story following four relatable characters and their relationships.

Do you have any advice for emerging actors?

Emily: Do the things that scare you and make you feel stupid or self-conscious. And ask questions!

Joe: It’s a tough industry to crack, I’m still trying to figure it out.

Auckland Theatre Company’s When Sun and Moon Collide will be running from 20 June – 6 July at the ASB Waterfront Theatre. To buy tickets, visit www.atc.co.nz