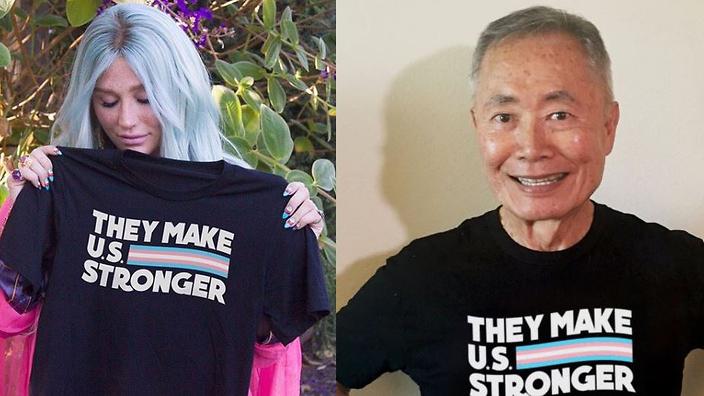 Kesha and George Takei have joined forces with GLAAD to speak out for trans rights in the wake of Donald Trump’s tweet promising to ban trans people from the military.

The celebrities each posted photos on social media wearing a shirt with the trans flag that reads “They make U.S. stronger”,SBS News has reported.

“I’m so excited to share that George Takei and I have teamed up with GLAAD to spread to love and support transgender people in the military,” Kesha wrote on Instagram.

“We’re all human, so let’s stand up for each other.”

Takei, a prominent supporter of trans equality, said, “We must stand on the right side of history.

“Let’s come together in support of the brave and honourable individuals serving in the military—all of them.”

Kesha and Takei are the latest celebrities to speak out against Trump’s anti-trans messages.

A group of former admirals and generals released a statement this week, saying that trans military personnel “must not be dismissed, deprived of medically necessary health care, or forced to compromise their integrity or hide their identity.”