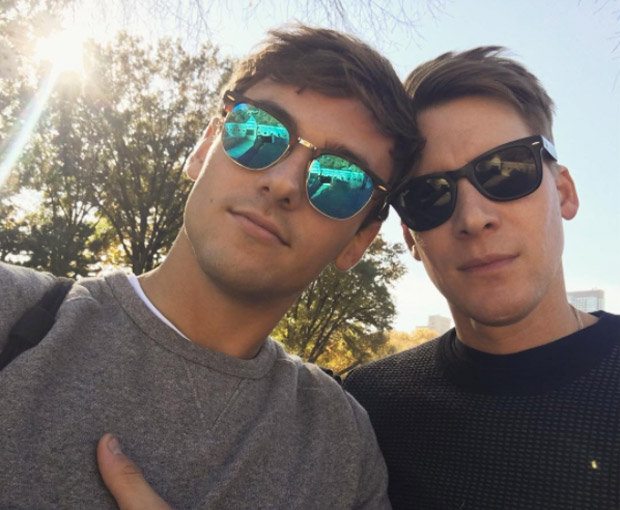 Olympic diver Tom Daley has opened up about his marriage to filmmaker Dustin Lance Black and their age difference.

Daley, 23, and Black, 43, married earlier this year in a stunning ceremony in the UK.

Daley recently spoke to the Belfast Telegraph about his career, his marriage and their 20-year age gap.

“Over the last few years I’ve matured both as an athlete and as a person and I’m in a good place in my mind and body,” he said.

“Actually, when I’m with the diving squad nowadays, I feel old because basically I’m the ‘granddad’ in the team — everyone’s younger than me.”

Daley said the age gap between him and husband Black is a non-issue.

“I don’t really think about age and we never notice the age gap,” he said.

“Funnily enough, I feel older in terms of maturity. I had to grow up quickly because I was only 10 when I first travelled to Australia without my parents to compete.”

“The 2012 Olympics was such a high, but once it was over, I felt really down in the dumps,” he said.

“You don’t really look beyond the event which you’ve spent four years preparing for and so there’s a bit of a comedown. At one point after it, I didn’t want to dive again.

“Meeting Lance during that period was amazing because he’s so motivated about his career and enjoys what he does so much that he helped rekindle my motivation and made me work harder.

“I literally fell in love with everything again and rediscovered my excitement in diving. He was exactly what I needed.”

Daley and Black are hoping to have children.

“Lance and I definitely want a family in the future — who knows when?” said Daley.

“We’re both lucky to have supportive families and we want to share that with our own children.”