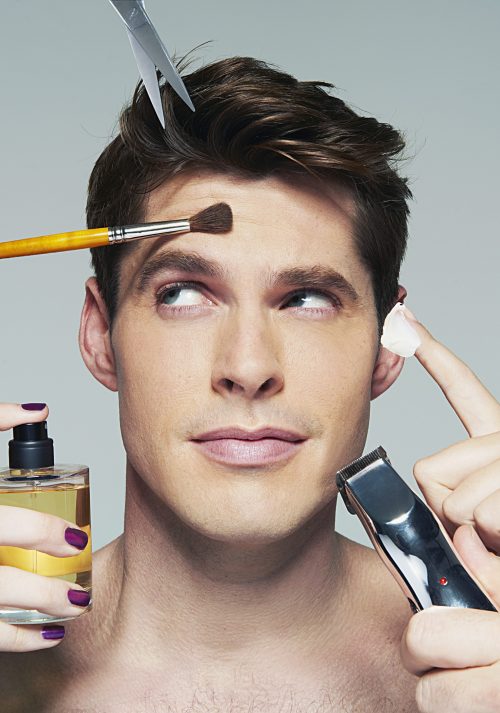 The men of today are less limited than previous generations (and do things that their fathers would have baulked at!). This includes spending lots of time and money on ‘grooming’ products and services – moisturiser, body hair removal and yes, even makeup.

At its most basic level, makeup is an art form – much like painting – only you’re using your skin as the canvas. Makeup can totally transform the face, who doesn’t want to have that kind of freedom?

It’s September 2017 and as gender roles continue to deteriorate, we are increasingly seeing the rise of men who are using their makeup skills to gain social media fame. Male makeup artists are being catapulted to viral success via Instagram and YouTube. CoverGirl famously made headlines for debuting beauty influencer James Charles as its first ‘Cover Boy’, after 58 years in the business.

Charles, Jeffree Star, MannyMUA, Kurtis Dam-Mikkelsen (better known as his drag persona, Miss Fame) and Patrick Starrr are just a few of the many fabulous men who are not only proving that makeup has no gender, but are breaking stereotypes of masculinity.

Of course, this isn’t the first-time men have famously dabbled with makeup – David Bowie, Marilyn Manson, Prince, Boy George… the list goes on. The idea that a man should not wear makeup is defunct — historically, from Neanderthals to Ancient Egyptians and Elizabethans, men have always worn it.

“Makeup is a very personal experience… it’s all just you looking into the mirror and embracing or enhancing who you are.”

And it isn’t just about drag queen aesthetics, (although checking out an episode or season of RuPaul’s Drag Race wouldn’t hurt you). It can also be used in subtle and less-obvious ways to improve your appearance while still presenting a ‘natural’ look. Dealing with dark circles under your eyes? Adult acne bothering you? Women have been using makeup to obscure their imperfections forever; it’s about time men were let in on a few of these beauty secrets.

In a Marie Claire article by Koa Beck, appropriately titled “The Beauty Boys of Instagram,” Beck spoke with male makeup influencers who “aren’t trying to appropriate a performative female identity, nor push a female character… [they] aren’t blurring gender — they’re expanding it.

“Their re-envisioning of what we consider to be ‘male’ is a reminder that, for too long, masculinity has been kept in a rigid box, too delicate to touch or reinterpret.”

In the article, makeup and visual artist Marcelo Gutierrez says, “I feel like male culture and men in general, especially straight-acting gay men, it’s not encouraged to be intimate with yourself in the same way that women have been for centuries.

“Makeup is a very personal experience… it’s all just you looking into the mirror and embracing or enhancing who you are.”

In an interview with WWW.com, Tom Ford was quoted as saying “I know so many guys — gay, straight, whatever — who steal a woman’s concealer and dab a little on their fingers when no one is looking. It just makes skin look better.”

He continues, “And if you’re a guy who doesn’t wear makeup, here’s how to figure out if you should: Get a magnifying mirror and look at your face. Do you have broken capillaries? Pale or sallow skin? Dry skin? Then fix it.”

Founder of popular men’s grooming site Very Good Light, David Yi, says “If a man wants to use beauty products, his sexuality or manhood is automatically called into question, [but] ‘grooming’ and ‘beauty’ are one in the same.”

“I feel like makeup has allowed me to become my better self,” he continues, “I can hide my imperfections while enhancing what I love. The other day, for instance, I tried a very dark eyeliner. I realised it just didn’t work for me, but a deep red eyeshadow definitely did. No matter what you use — a lot or a little — it doesn’t matter unless you truly start loving who you are and finding that self-empowerment.”

“I think that now more than ever, Generation Z has allowed for a safer space where guys and girls can truly be who they want to be. They can finally express themselves for the most part, however they’d like. Because of social media, the internet, and Generation Z being all about social good and change, we’re seeing gender roles blurring and sexuality being more fluid than ever. Gone are the notions that you have to be an exact way — that’s antiquated.”