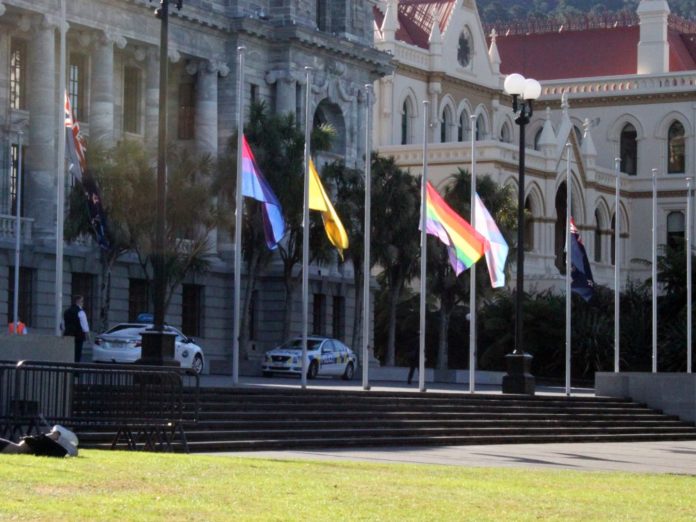 The New Zealand Truth newspaper reported that nearly 20 per cent of New Zealand’s prison population consisted of sexual offenders. The paper said that the convictions probably only represented a small proportion of the offences that were actually taking place.  It singled out “homosexualists” in high society and in the ranks of Bohemia “where it is claimed a great deal of deliberate perversion is practised under the cloak of art.” The report said, “lengthy terms of hard labour and even severe floggings have failed to curb the sexual license of the unfortunate pervert.” It went on to talk about eugenics and suggested various remedies – from segregation for life to surgical operation.

Thirty-five years ago Labour MP Fran Wilde introduced the Homosexual Law Reform Bill in Parliament. The private members’ bill set out to decriminalise consensual sexual activity between males over the age of 16 and make it illegal to discriminate on the grounds of sexual orientation. Within a week, a group of MPs including Graeme Lee, Norman Jones, and Geoff Braybrooke promoted an anti-reform petition. Braybrooke said that this would be the “thin edge of the wedge […]  It could well lead to gay bars, gay massage parlours, gay churches, gay marriages […] and gay people adopting children.” Norman Jones was more rabid.  Speaking at a public meeting he told both anti-reformers and a smaller group of pro-reformers “We do not want homosexuality legalised.  We do not want our children to be contaminated by this.  Turn around and look at them […] gaze upon them, you’re looking into hades.  Don’t look too long or you might catch AIDS.”

The national Census took place, and for the first time ever, the number of adult same-sex couples living together could be determined. Instead of a specific question, a person’s individual information was cross-referenced with who they were living with. The Census showed that 6,500 adults were recorded as living with a partner of the same-sex. This equated to 0.4 per cent of all adult couples. However it is likely that the actual number was higher as people may have been reluctant to self-identify their same-sex relationship (it was only 10-years since the heated homosexual law reform debate, and just 2-years since anti-discrimination legislation had come into force). By 2006, just over 12,300 adults said they lived with a partner of the same-sex, 0.7 per cent of all adults living as a couple.

The Transgender, Intersex, Bisexual and Rainbow flags were flown at half-mast on the forecourt of Parliament.  Originally the flags were to be flown to mark the opening of the ILGA World Conference.  However they, along with the New Zealand flag, were lowered to half-mast in mourning for the victims of the Al Noor Mosque and Linwood Islamic Centre terror attacks in Christchurch three days earlier.  New Zealand hadn’t experienced this scale of terror attack before, with 51 people killed and 49 injured. Subsequently, a number of events throughout the country were either cancelled or postponed for fear of similar attacks – particularly against Muslim, Jewish and rainbow communities.  In Wellington, the annual Out in the Park was cancelled and the pride parade was postponed until May.