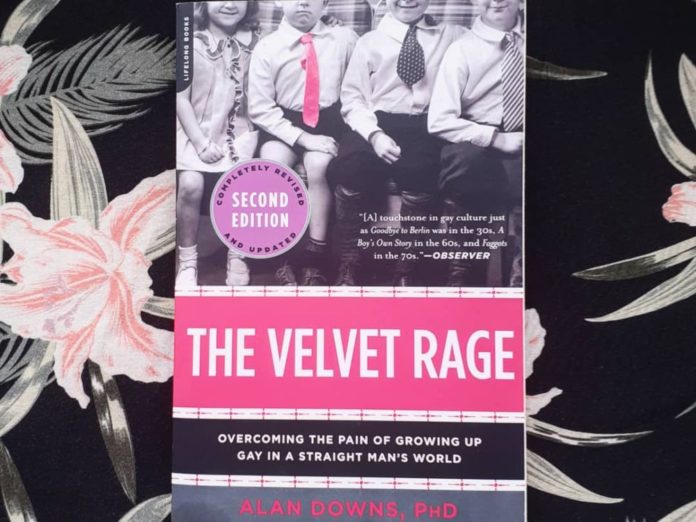 Daniel Devenney takes a look at early 21st Century gay literature, Alan Downs’ The Velvet Rage: Overcoming the Pain of Growing Up Gay in a Straight Man’s World, and discovers how quickly times have changed.

“The experience of being a gay man in the twenty-first century is different from that of any other minority, sexual orientation, gender, or culture grouping. We are different from, on the one hand, women, and on the other hand, straight men. Our lives are a unique blending of testosterone and gentleness, hyper-sexuality and delicate sensuality, rugged masculinity and refined gentility. There is no other group quite like that of gay men. We are a culture of our own,” – Velvet Rage author Alan Downs.

My feelings about this book are as complicated as it’s subject matter. It was a fascinating read and while I agree that it holds a lot of truth, it also makes sweeping generalizations, which I found quite polarizing.

It was written by a clinical psychologist, Alan Downs, PhD. The book is based on years of research. It features some truly harrowing and insightful accounts from his patients and his own personal experiences with shame and anger. It tackles issues like depression, substance abuse, sex addiction, and suicide. It aims to portray the stages of a gay man’s life and to help him navigate his way out of shame and self-destructive behaviours by offering practical strategies and advice.

There were many aspects of this book that I found relatable, but there were just as many that I did not. While I have no doubt that it will be helpful to many, I feel that it largely speaks to a few specific types of gay men. Personally, I’ve never had issues with monogamy or been drawn to the sex-crazed party boy persona that often dominates gay culture. I have said it before and I will say it again, some of us are just quiet, sensitive nerds. I have no problem with any subculture within the queer community. There’s no shade intended. I’ve just sometimes felt that certain images have overshadowed the rest of us. Thankfully, representation and the depiction of gay men has expanded radically in the media and pop culture in the past decade. This has shone a light on many of us that perhaps don’t fit the common mould or stereotypes.

My point is, there is no one way to be gay, and there is no right way to be gay. It’s simply not a case of one size fits all. As gay men, we share many experiences. We’ve all been subjected to some form of shame by society or specific individuals within. We’ve all spent a portion of our life in the closet and we’ve all had to come out etc. But we are also all completely unique. As the times change, so too, do we, and our stories. However, it’s immensely important that we acknowledge and respect the hard-won social acceptance that our predecessors fought for, many of which literally gave their lives. I understand that I wouldn’t have the life I do if it weren’t for them.

Overall, I enjoyed this book and it did make me think a lot about my own life and past experiences. The chapters which dealt with validation (and my constant yearning for it) particularly hit home. But I can see why opinions among gay men are somewhat divided on it. It does have a tendency to tar us all with the same brush. I didn’t relate to a lot of the material, perhaps it’s a generational thing, but I still found it interesting. It’s important to keep in mind that the material was first published in 2005 and hasn’t been updated since 2012. I found it thought-provoking and challenging, therefore, in my opinion, well worth the read. Personally, the main thing I will take from it moving forward is to spend more time seeking out the things that bring me pure joy, rather than bursts of short-term validation. I think every gay man will take something completely different from this book.

“Contentment is created when your behaviour is consistent with your values. When you act in ways that are consistent with the core of who you are, even when your actions aren’t approved by others, you increase your overall contentment. Happiness, success, money, relationships, and even the approval of others will come and go in your life, but what is ultimately satisfying is feeling content.” – Velvet Rage author Alan Downs.

More of Daniel’s reviews can be found at www.danieldevenney.com