Senior public servant and diplomat Alister McIntosh was born in Picton. In 1925 McIntosh entered the public service and went on to serve New Zealand in various roles for the next five decades.  He founded this country’s diplomatic service and headed the Prime Minister’s Department for more than twenty years. According to author Ian McGibbon, “McIntosh never sought a high public profile… His sensitivity to others’ problems and needs, his lack of bigotry and self-righteousness and his non-judgemental approach were endearing qualities.” McIntosh lived in an era when careers (and lives) could be destroyed by an accusation of homosexuality. In 2003, historian Michael King suggested that McIntosh may have missed out on becoming Commonwealth Secretary-General because of his sexuality (British security officials warned that his homosexuality made him susceptible to blackmail and therefore a security risk).

Activist and educator, Robin Duff stood in the General Election as New Zealand’s first openly gay parliamentary candidate. It was a courageous move because at the time homosexual activity was still illegal. But Duff was no stranger to leading from the front.  He helped establish the University of Canterbury Gay Activists Society and Gay Liberation Christchurch in 1972 and, according to fellow teacher Jude Rankin, was the first openly gay secondary school teacher in New Zealand, “he was quite out and proud and basically unstoppable really.” Duff didn’t get elected but continued to advocate for rainbow teachers and students through his work with the Post Primary Teachers’ Association up until his death in 2015.

Media reported on another homophobic advertising campaign from the Marlborough based Moa Brewing Company.  The company ran billboards with the text “Fifty years ago before there were lesbians this is what beer tasted like.”  P. Armstrong complained to the Advertising Standards Authority that the advertisement was extremely offensive as it implied same-sex orientations and relationships were a recent phenomenon which was being “associated with a decline in standards, tastes, authenticity and in particular (by implication) with a decline in masculinity.” A year earlier the company had made international headlines when it promoted its full strength beer with “light-hearted” t-shirts that read: Low Carb B(Q)eers, Moa Beer – Full Strength.  A pink ‘Q’ was superimposed over the ‘B’ implying, as writer Max Simon noted: “you’re a sad little fag if you need fewer calories.” 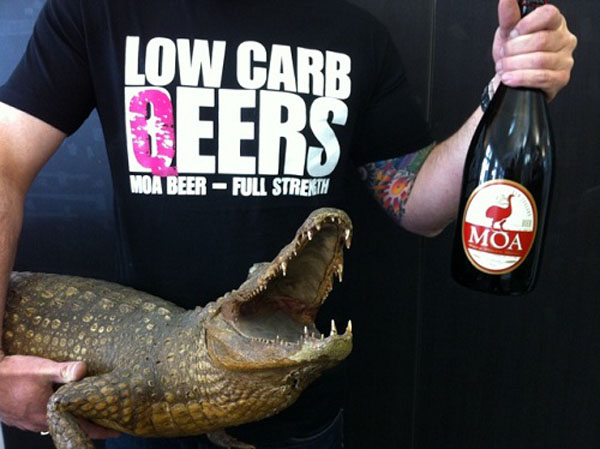 A tribute evening was held in Wellington to honour icon Georgina Beyer.  Earlier in the year Beyer had been diagnosed with chronic end-stage renal failure and required dialysis four times a day. MP Louisa Wall told media that “we need to celebrate and we need to remember and we need to acknowledge and we need to support her for the work that she has done.”  Event organiser Jo Paku said, “while we remember Georgina as the politician, as the mayor, as the performer, as the artiste, we also want to pay homage to her whakapapa as a Maori woman.” The event was held at St James Cabaret, the same location where Beyer won “Miss Personality” in the Ms Wellington contest 34 years earlier.  Beyer would eventually receive a kidney transplant in 2017 – a birthday gift from close friend Grant Pittams.

The project Trans Past, Trans Present was launched at the Museum of New Zealand Te Papa Tongarewa to mark International Transgender Day of Remembrance (20 November). The collaboration between the museum and community groups encouraged trans people to submit objects of personal significance.  The taonga were photographed and a digital record deposited into the national collection. “What emerged was a quirky collection that is a testament to the diversity of trans experiences, and which disrupts established (and cis-written) narratives about trans lives,” wrote project co-ordinator Will Hansen.  From a pounamu grounding stone to an envelope addressed to “Mr”, to a hand-poked tattoo on a participant’s leg – “a symbol of me being openly trans, even when I could ‘pass’ and fly under the radar, for those who can’t be.”