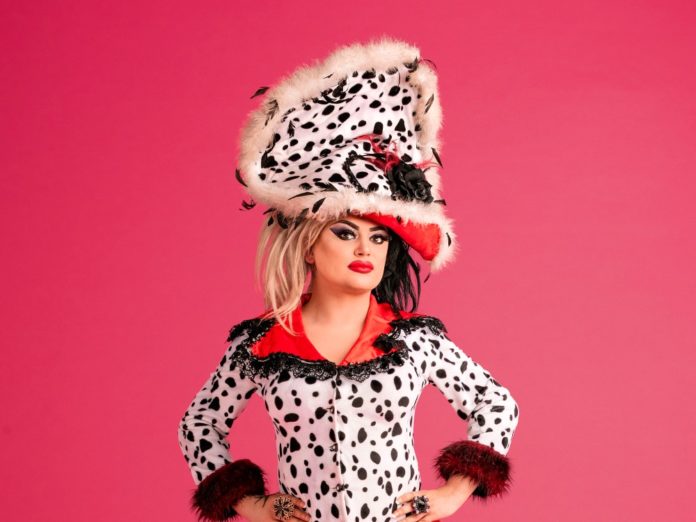 She may not have won, but there is no debating that Baga Chipz was the star of the inaugural season on RuPaul’s Drag Race UK. A Season so successful, that the BBC has already commissioned and cast season 2 and 3! She Zoom’s Oliver Hall to discuss life after Drag Race, her growing success and not letting it go to her head.

“I can hear you. Can you hear me?” I ask Miss Chipz as she wedges a pod in each ear from the passenger seat of a car driving her back from a London TV studio where she has been filming a show with Drag Race UK (RPDRUK) winner The Vivienne.

“Yeah, that’s much better,” she replies – flawlessly dropping her famous catchphrase within the first sentence she utters, while dark and rainy British streets flash past her in the window.

Over the course of our conversation, I will realise that this has not happened by chance. Baga (aka Mark Botfield) should be a media trainer. That her star-making performance on RPDRUK was not simply clever editing of her working-class wit and charm by a production team, but a calculated performance from a queen who understood that every breath she took was part of the competition.

“They’re making a TV show at the end of the day,” she says explaining her strategy. “I know how to work the camera and know how to get the airtime. And it’s not favouritism; you have to fight for that air time! So when I saw people arguing I would get my head in there and pull funny faces. I came up with catchphrases. I wore a bright yellow feather coat in the confessionals. Some of those queens were wearing black t-shirts! You’ve worked so hard to get here; this is the time you have to make an impression!”

She says she thought they were taking the piss when she received the initial call telling her she had been selected for RPDRUK. “I’m not really known for my garments or my makeup. I can be very brash and loud. I’m common-as-muck. My drag is very much based on comedy, so I’m more SNL (Saturday Night Live) than Drag Race,” she says listing why she thought she might not make the cut. “But it turns out, it’s all about the personality. And that’s the tea!”

Baga admits it took a couple of episodes to gain her confidence after being the first queen to enter the workroom. “I thought I may have been out within the first couple of episodes because they might want the beauty and the glamour, but after the acting challenge, the girl band challenge and snatch game, I thought I’m actually a contender because I have more (winner’s) badges than anyone… After I won the third badge, I thought I know how TV works, this means there will be three girls each with three badges in the final.”

Baga was right and making the final meant a full month’s worth of filming, often from 5 am till midnight, and up at the same time the following day.

Despite not being able to “sew for shit,” (a frequent pitfall for Drag Race queens) Baga remained a steadfast favourite for the final until a challenge forced contestants to drag-up a family member. While the other queens were given relatives they were close with, Baga was teamed with her mother, despite having only seen her ‘four times in the last decade,’ and being raised by her grandmother. The dynamic between the two was portrayed as strained, and the shows judges concluded that Baga needed to be kinder to her mum.

“They’ve got to give me a little bit of shit,” says Baga pragmatically. “They were showing the comedian all the way through, and I think they wanted to show a softer side. On the next episode, Ru gives me a hug. They were trying to make me more human. Not all family relationships are the same. If my mum came down the stairs in a certain dress I’d be like ‘Mum, you can see your fanny, you can see your tits, and you can see your belly,’ and that’s just what we’re like. My mum on camera is nothing like she’s like in real life, but they show 31 years in three minutes. People don’t know my life, I could have been beaten as a child, but they’re so quick to judge… I’m not gonna lie. I have drama in my family. We’re not the bloody Waltons.” But Baga ensures her relationship with her mother is ‘much better’ since the show. “It’s all shits and giggles,” she laughs, “she’s not moaning, I brought her a Dyson!”

A Dyson hasn’t been Baga’s only major purchase since becoming the most-booked queen from RPDRUK. “Financially, it’s changed my life. I’ve brought a house out of it,” the 31-year-old tells us, explaining she made more in the six months since the show aired, then she did in the whole decade prior.

Her post-Drag Race highlights have included being the first-ever drag queen to appear on Celebrity Masterchef, winning Celebrity Pointless and modelling for Calvin Klein and Lady Gaga.

Her world tour, which was postponed due to Covid, has been rebooked for October next year, and with Australian dates locked in, a New Zealand trip looks possible.

Then there are her acting roles. Real acting roles. In dramas. Playing both drag and non-drag characters, alongside Bafta award-winning actors.

And for fans of Baga’s iconic songwriting lyrics (who could forget ‘Baga Chipz is stunning, Baga Chipz is class, Baga Chip is sexy, she takes it up the ass’), The Frock Destroyers are back! 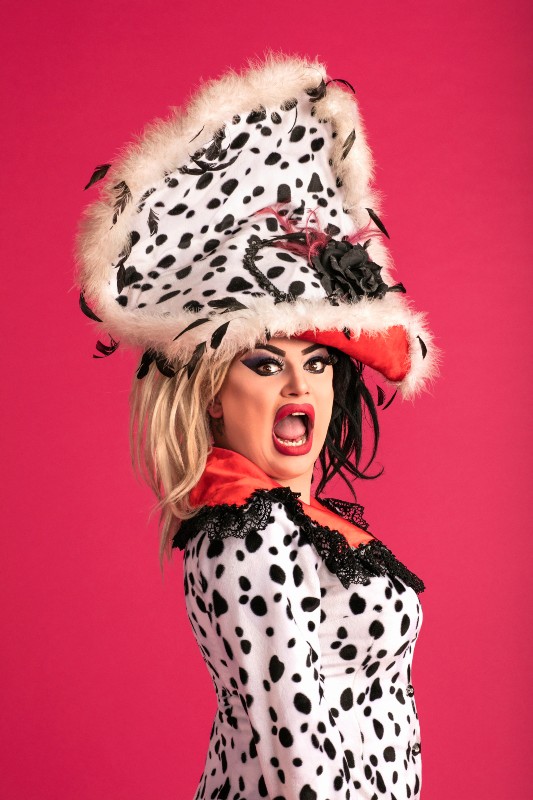 Baga’s infamous girl group (with fellow queens Blu Hydrangea and Davina DeCampo) made Drag Race herstory when their song ‘Break Up (Bye Bye)’ made the UK Top Ten. Their hook-laden new single ‘Her Majesty’ looks set to do the same and paves the way for their debut album, Frock 4 Life!

However, the queen who masterminded maximising camera time on RPDRUK, says even she didn’t expect the fame that followed.

“Not to this extent. I didn’t think I’d be on Celebrity Specials with pop stars and gold medallists that I grew up watching. I never thought I’d be in tabloids and on chat shows and making thousands of pounds just for doing an Instagram post.”

But as Baga points out, that is the beauty of what RPDG does for its contestants, “you don’t have to win to win.”

“And I’m not stupid,” she announces. “Of course, they didn’t want me to win because they want me on bloody All-Stars! They want as much Baga content as they can get!”

Now Baga faces a challenge that has shadowed so many reality tv stars. When your popularity has come from your relatable personality and down to earth sense of humour, how do you maintain that, when fame and success have changed your life radically.

“It would never go to my head,” she assures. “I’ve got money now, and it hasn’t changed me. Money doesn’t change you, happiness does. You can pat yourself on the back [for your achievements], but always treat people how you want to be treated. Be nice on the way up, because people remember when you’re on the way down. I knew people who ignored me because they thought their shit didn’t stink, and now I’m at a certain level, they’re asking if I want to go for a drink? Do I, fuck! I don’t even reply.”

And with that final dose of wisdom, Baga drops her phone, and our Zoom call is cut off. Perhaps this is another carefully orchestrated move from a performer who knows the importance of leaving your audience wanting more …