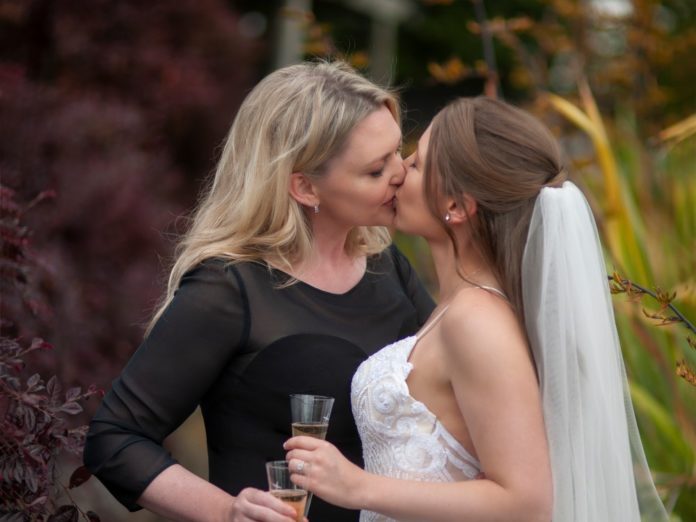 Ngāti Whakaue, Te Arawa, columnist, author and singer-songwriter, Lizzie Marvelly tells us about her passions for intersectional feminism, her beautiful wife and her home town, Rotorua.

Marvelly’s voice exudes joy as she talks over the phone from her Rotorua home. She’s excited for International Women’s Day and the chance, “to celebrate the powerful thing it is to be a woman.”

She says she will spend the day, “remembering the sisters that achieved so much before us,” and trying to, “inspire and lift up our younger sisters.”

“It’s full of promise!” She concludes.

For Marvelly, feminism’s next wave will be, “passionate and brimming with potential to realise the goals these previous waves kickstarted,” she says – highlighting closing the gender pay gap as a pressing goal.

“As much progress as we have made, I am seeing a bit of a step backwards because of the pandemic,” she notes sadly.

“It was largely women who lost their jobs. And anecdotally, I’m seeing a lot of mothers in heterosexual relationships falling back into those old roles of being the one who looks after the children while they are being home schooled in lockdown.”

“It’s like that with feminism. You have these huge waves, followed by backwards steps. That’s why it’s so important we keep kicking it forward!”

In her 2018 book, That F Word, Marvelly is clear that feminism must embrace a intersectional perspective. Three years on, trans-exclusionary feminism still has a strong voice both within mainstream and Rainbow communities.

“From my vantage point as a gay Māori woman, the last thing I want to do is oppress someone else. When we all work together we are much more powerful than when we are divided. My trans sisters are inspirational and bloody hell, some of them have had a rough road,” says Marvelly reflecting on this with audible sadness. But her voice toughens as she draws a metaphorical line in the sand – “if your feminism isn’t inclusive, it’s not really feminism!”

Unconsciously we both pause for a second. As the impact of her words resonate.

“You’re going to create some horrendous days for me on Twitter!” She acknowledges.

In January 2021, Alison Mau published a stuff investigation that has been dubbed the New Zealand Music Industry’s #MeToo reckoning. Yet it came nearly five years after Marvelly had first spoken publicly about her experiences.

“It needs leadership that wants to make genuine change,” says Marvelly when I ask why she thinks experiences like hers are still prominent.

“When you’ve got an industry with a heavily skewed gender divide it becomes difficult for women, particularly, to make traction. It’s a completely different experience in the music industry for example, to be a teenage female artist, than it is to be a male middle-aged executive.”

“That was certainly a factor in me leaving the music industry. I just didn’t want to deal with that disgusting crap anymore. Some of the people involved in those experiences are just revolting human beings.”

Marvelly believes the way industries are set up has a huge effect on whether victims will come forward; a problem that runs deeper than fear of judgement.

“When I look back at some of the incidents I experienced in my late teens/early twenties. I wasn’t worrying about what people will think. It was, ‘if I speak up I’ll never work again,’ because those people had so much power and I had none.”

Her advice to others who have survived abuse is to seek support.

“Look after your safety. Reach out to someone you trust. There’s a lot of pressure on people to report and go through a formal process. The most important thing for anyone who has experienced any kind of non-consensual activity or exploitation through an imbalance of power dynamic is getting support. Whether that’s through family or friends or one of a number of agencies out there. It’s worth noting you can access counselling for free in NZ under ACC.”

For now, Marvelly has left writing and music behind to fully focus on her ‘dream job’ Director of Te Whare Taonga o Te Arawa Rotorua Museum which she was appointed to last July.

Since it was damaged in the Kaikoura earthquake four years ago, the Museum has been closed for a programme of restrengthening. It is expected to reopen in the next two to three years, due to challenges presented by the early 1900s pumice concrete building.

Marvelly believes this presents an opportunity to bring a new vision to life.

“We’re embarking on an exciting journey. We’re setting out not only to reopen our Museum for our community, but to realise an ambitious vision of creating a world-leading whare taonga.”

She acknowledges the redevelopment is a big job and one that allows her little-time for side projects like music.

“I do occasionally sing and play the piano – but mainly in my lounge room for my wife and our puppy, Awhi,” she confesses.

Marvelly and partner Lisa Gerrard got engaged in April 2019 and married at the end of 2020 after Lockdown had forced them to delay their wedding.

Marvelly says the stressful process of reorganising their big day brought them closer together, and tells us married life is wonderful. “She’s my reason for breathing,” she says candidly.

But does tying the knot really make things feel different?

“Not really,” she acknowledges. “We’ve always had a really beautiful relationship. I’ve always enjoyed how we treat each other and the depth of our love for each other, and none of that has changed.”

The two married in Marvelly’s hometown Rotorua which she describes as a perfect wedding destination with stunning scenery for wedding pictures.

“Rotorua is my tūrangawaewae. It is, and always has been, my home. Rotorua has always embraced me, and my sexuality has never been an issue here. I’m sure my outspoken feminist views about intersectional equality have sparked conversation every now and then, but we like a good debate down here! I grew up surrounded by strong women here in Rotorua; this place doesn’t tend to produce wallflowers.

She tells us her and Lisa often walk the Rotorua streets hand-in-hand and have never had any negative experiences there.

The couple’s favourite Rotorua weekend begins with, “a walk in the redwood forest, lunch at Atticus Finch, an afternoon at Lake Ōkareka, and a BBQ with my family.”

As a city that has been greatly affected by our border closures, Marvelly hopes Kiwis from all around the country will visit for a holiday and believes the experience will leave them pleasantly surprised.

“I hope that visitors will enjoy our manaakitanga and feel refreshed by connecting with nature down here. I often find that people don’t realise just how beautiful it is.”