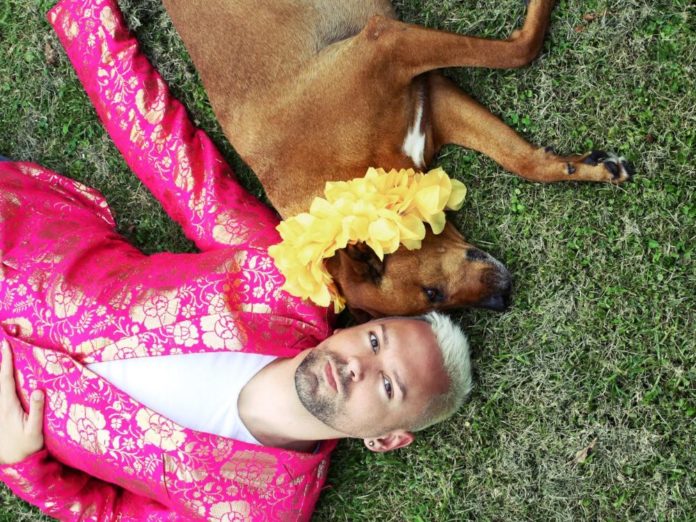 “One of the things I love most about Woof! is that it really does draw every colour of the Rainbow and beyond,” Oates enthusiastically tells us, describing Woof’s every increasing attendance. “It’s really about the love of dogs more than anything else. We get the full spectrum of dog lovers, right from the dog obsessed queens (like myself) right down to cool young kids. I love that Woof! also attracts a nice contingent of straight allies. We don’t discriminate, but we are very much a Rainbow event!”

The Auckland Rainbow dog show is now in its ninth year, over the years Steven has seen rainbow romances blossom at Woof!

“A really nice aspect of Woof! is that having dogs makes it easier for people to talk to each other. The dogs are a real icebreaker and anyone can come up and ask… how old is your dog? What breed is your dog?… It’s a great Segway into conversation, especially for those that would normally be shy to approach someone at a bar or party. I know of at least two couples that met at Woof! and are still going strong several years later!” He says with delight. Advising singletons, “Don’t be shy! Go ask that cute guy/girl if you can pay their pooch!”

As well as being a great chance to meet new people and catch up with old acquaintances over a picnic in the park, one of Woof!’s draw cards has always been the celebrity judges that Oates handpicks. A pressurised role, these notables have to decide which pooch is worth a prize and who should leave with empty handed!

“We have been so lucky over the years having fabulous judging panels made up of celebrities and community stalwarts,” reflects Oates who noted, “In the past it has been a Woof! policy to never have the same judge more than once but this year we are doing something slightly different – ‘Judges All Stars’! Very much in the vain of RuPaul’s Drag Race All Stars we are bringing back fan favourite judges from previous years!”

This year the hefty weight of granting the wishes of some and dashing the hopes of others will fall on: handsome Shortland Street star Ben Barrington, journalist and feminist-icon Ali Mau, comedy legend Tom Sainsbury and divine drag diva Buckwheat!

The fab four will be casting judgement on categories that include: Best Dressed, Most Camp, Most Butch, Wee Woofers (kids), Best Talent/Trick, Best In Show and express’ personal favourite: Dog & Owner Lookalike!

“If there was ever a time to prove the old adage, ‘people look like their dogs’ then Woof! is the place to do it!” Laughs Steven, assuring us that some entries are quite uncanny!

“Our Dog & Owner category can make you do a real double take! Which one is the dog and which one is the human? Sometimes I end up interviewing the dog by accident thinking it’s the owner!”

The Auckland Rainbow Dog Show Woof! will start at 1pm on Sunday 21 March at Western Park in Ponsonby, Auckland. Enter via Beresford St.