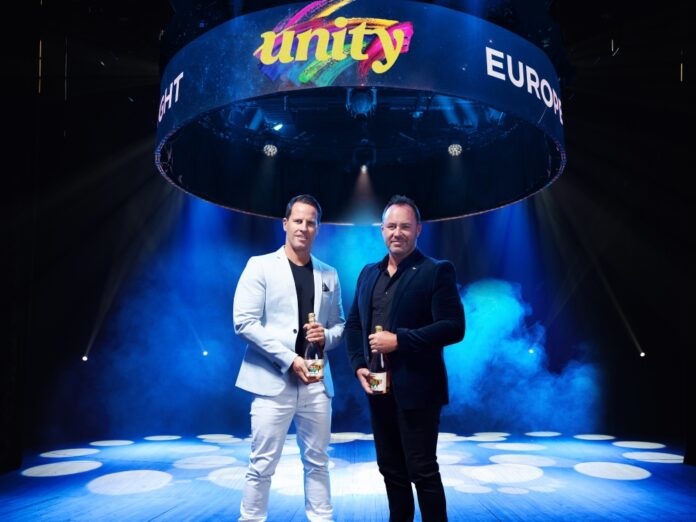 The innovative and multi-award-winning Invivo (who are well known for their collaborations with Graham Norton and Sarah Jessica Parker) is set to launch the new Eurovision Song Contest wine range, featuring a Prosecco D.O.C and Prosecco Rosé D.O.C, this April in Europe and will be showcased at the hugely popular Eurovision Song Contest as its official Prosecco.

The Eurovision Song Contest is the world’s biggest live music event: its 66th contest will be staged in Turin, Italy, in May, with 40 countries participating. The event will be broadcast live across Europe and beyond, and an estimated 182 million fans tuned in to watch the contest last year. Major acts participating over the years have included ABBA, Celine Dion, Julio Iglesias, Bonnie Tyler and Austria’s Conchita Wurst.

Invivo X Unity will also be available in stores in New Zealand later this year, in time for spring/summer.

The partnership between Invivo and the Eurovision Song Contest has been in development for months, is a long-term arrangement and has been designed to cater to the millions of Eurovision fans seeking an all-inclusive beverage range on everyday occasions and at gatherings all year round.

Invivo’s Cofounder Tim Lightbourne sees huge potential for the partnership, saying, “Eurovision is iconic, and we’re delighted to be working with the like-minded team – what better platform to launch Unity than with Eurovision’s millions of fans across Europe. Rob (Invivo’s other co-founder) and I attended the Eurovision finals a few years ago and were impressed by the passion and dedication from fans and all the glamour and diversity from the countries’ contestants!”

Tim adds, “A philanthropic approach is also important to us at Invivo, and there is an ongoing charitable element to Unity wines that supports communities that are important to Invivo and the Eurovision audience. This year we will be donating a portion of Unity proceeds to the Red Cross.”

The brand name Unity was developed by Invivo and inspired by Eurovision’s ability to unify its contestants through its all-inclusive representation of diversity. Unity features the official logo of the Eurovision Song Contest on its neck collar, accompanied by a striking set of point of sale that features the Eurovision logo.

Invivo was first established in 2008 by Kiwi wine entrepreneurs and old school friends Tim and Rob, and their mission is to bring people together so great things can happen. Invivo wines are now available in 16 countries, and the team has clocked up more than 300 awards. Invivo is based in New Zealand, producing Sauvignon Blanc, Rose and Pinot Noir from New Zealand and works with producer partners worldwide to make great wines and spirits, including Italy, Argentina, France, Ireland and Australia.

For more information, head to invivowines.com/unity.