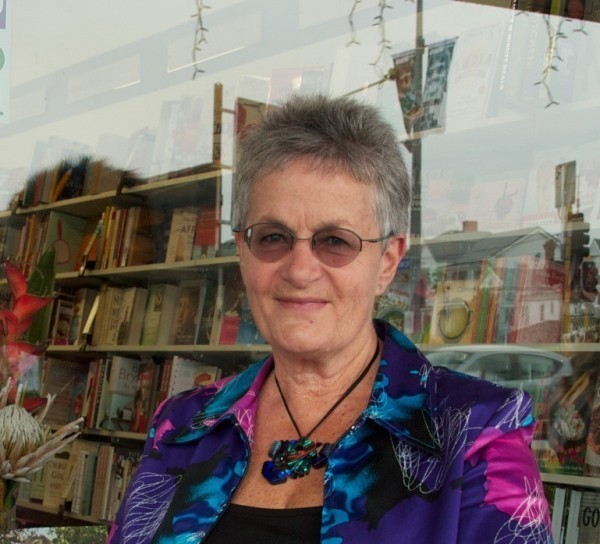 Carole Beu has run The Women’s Bookshop – first in Auckland’s Mt Eden, then in Ponsonby – for more than 25 years. She has been a board member of both Booksellers NZ and the Auckland Writers Festival and regularly reviews books on radio and television.

My mother always accused me of having an over-developed sense of righteous indignation. She meant it as a criticism. I was well into adulthood before I came to understand that it was actually a compliment.

People have exclaimed over the years about my energy and passion – often with a tinge of criticism. Again, “old age” has allowed me to value my high energy levels and to recognise that people’s comments often reveal more about them than me.

My over-developed sense of righteous indignation, my enthusiasm and my energy have stood me in good stead and often given me the courage to speak out against injustice. In a world where women are silenced, expected not to have opinions and certainly not to express them, I have often been the person who said what needed to be said. I did it unwittingly when I was young. I have gradually become more astute at judging when to “deliver the message” and when it would be wiser to choose to stay silent.

The sexual, physical, and emotional violence meted out to women worldwide on a daily basis shocks and angers me. (Oh, wait a minute – women are not supposed to be angry!) People have sometimes commented that women are violent too. Yes, a few are, but there doesn’t seem to be the need for a chain of refuges the length and breadth of New Zealand for men to escape from dangerous women.

In her essay on rape culture, “The Longest War”, Rebecca Solnit (Men Explain Things to Me and Other Essays, Granta 2014) asks when the hundreds of attacks on women all over the world will be recognised not as isolated incidents but as a pattern. “Violence doesn’t have a race, a class, a religion, or a nationality, but it does have a gender.”

The men I know and care about are not violent but most attacks are perpetuated by men with a sense of entitlement and a need to control. “So many men murder their partners and former partners that we (in the USA) have well over a thousand homicides of that kind a year – meaning that every three years the death toll tops 9/11 casualties, though no-one declares a war on this particular kind of terror.” – Solnit.

Novelist Chimamanda Ngozi Adichie gives milder but equally insidious examples. “Each time I walk into a Nigerian restaurant with a man, the waiter greets the man and ignores me,” (We Should All Be Feminists, Fourth Estate 2014, adapted from her Tedx talk). One of her women colleagues was over-ridden when raising an important point in a meeting, only to have the same point listened to and praised when raised by a man. Adichie declares that we must learn to raise our daughters and our sons differently, to free them from the weight of gender expectations.

I adore my small grandson and am involved in helping my daughter raise him without a sense of entitlement or a need to control others. His chances are increased by having a considerate and gentle father.

I have spent the past 38 years caring and advocating for my intellectually disabled son. He is generous and kind, would never hurt anyone and doesn’t understand when people are ‘mean’.

FOR MORE THAN 25 years I have owned and operated The Women’s Bookshop in Ponsonby Road, Auckland. It has been suggested to me that the name is now anachronistic but there is a huge community of women (and men) who support it and I am proud that it is a friendly, inclusive space. Men occasionally stand in the doorway and ask if they can come in. We welcome them with a smile – it is men of intelligence and perception who want to come in anyway.

I have broadened the stock-holding of the bookshop over the years to cater for changing attitudes and interests, and to ensure it is recognised as one of the best little independents in New Zealand. My wonderful colleagues and I all read avidly and love recommending books to customers. We share jobs, consult about decisions, welcome the volunteers who help us run author events – and generally try to operate on feminist principles. And we’re delighted that the feminist section of the shop is once again growing, as new, bold young feminists get themselves into print.

I am a feminist because I believe in the social, political and economic equality of women – not such a radical idea, really!

I “came out” as a lesbian in my early forties – it took me that long to discover the joys of relating to another person as an equal.

I value the strength of women’s friendships. I have two particularly close friends who are totally supportive and trustworthy. We start our frequent conversations from a place of knowing and accepting each other.

I have no intention of retiring. I have the best job in the world – meeting fabulous women every day and famous authors often! So I’ll keep working well into old age and I’ll continue making my own small protests. I don’t own a pair of high heels. I refuse to set foot in The Warehouse or in a Starbucks coffee house.

My hair may be grey but my blood is scarlet.