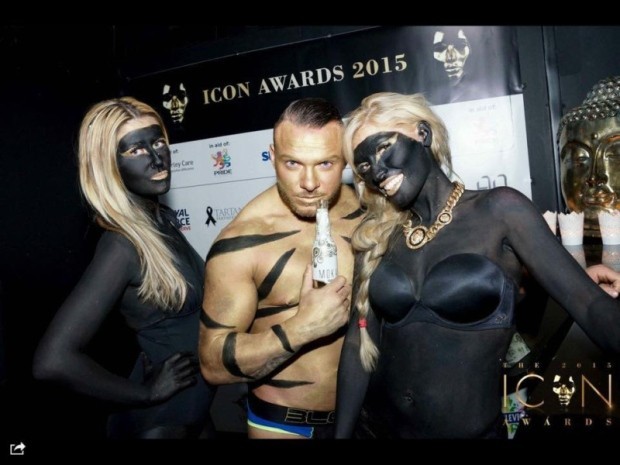 A GLBT awards show in Scotland has come under fire for using models wearing Blackface to promote the event.

The Icon Awards, an awards ceremony to celebrate the contribution of gay and lesbian people to Scottish life has been caught up in a race row after the organisers used models in black face to promote the event, leading to American company Andrew Christian to withdraw from the event.

Blackface is the controversial practice of a performer putting on black makeup to appear as a stereotyped character of African descent.  Blackface became associated with negative stereotypical depictions of blacks in the Anglo-Saxon world (labeling them as stupid, lazy, lecherous, dangerous, comical, or just generally beneath whites)

The Scotsman reports that anti-racism campaigners have criticised the organisers of the Icon Awards, saying that “blacking-up” is unacceptable. Patrick Harvie, the Green MSP and gay rights campaigner, tweeted: “I’m not involved, but I am amazed that it seems not to have occurred to the organisers that ‘blacking-up’ is not OK.” Yesterday Harvie added: “I don’t think anybody suggests there is racist intent, but really people should have the good sense to avoid this kind of imagery.”

Andrew Christian, a major sponsor of the awards have withdrawn completely with a  spokesperson saying “When we saw the pictures we realised that was not something we would like to support and we are not ­going to contribute in the ­future”

Icon awards event manager Michael Macfarlane said in a statement that  he was “saddened” that the images had been seen as negative and apologised “to anyone who has taken offence.”