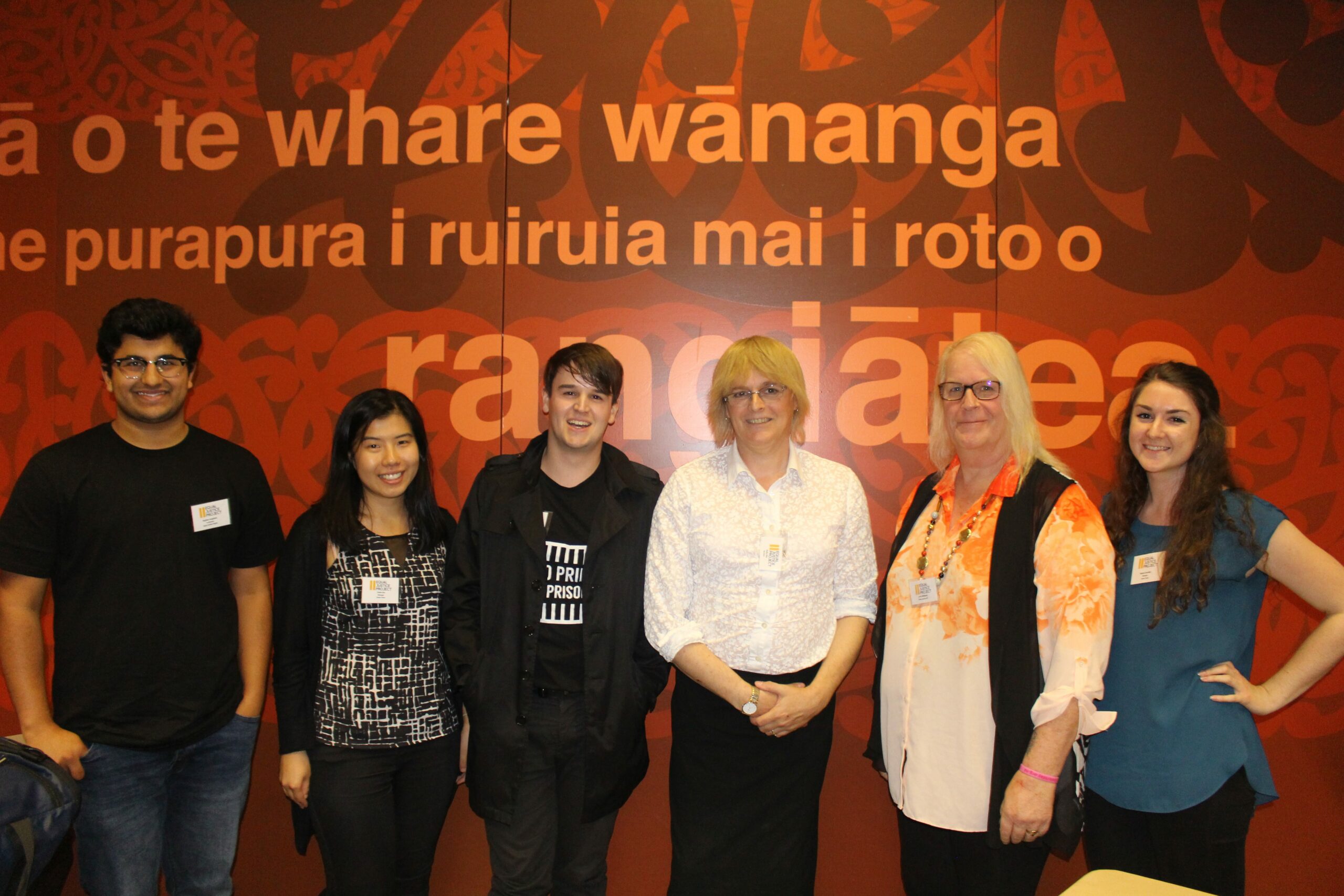 The library basement lecture theatre was around half full, with a range of diverse attendees’ eager to hear the opinions of the three panelists; Kelly Ellis, Lexie Matheson, and Ti Lamusse. The panel begun introducing themselves and explaining their ties to the trans community.

Kelly Ellis is a barrister and long-time trans advocate as well as being a trans woman herself. She brought a solid legislative backing to the conversation as well as a wealth of personal experience from both working pro-bono cases for incarcerated trans prisoners and living as a trans women in New Zealand society.
Ti Lamusse is a current Masters student at the University of Auckland who is concentrating their sociological studies on the experiences of trans people in prisons. They are also a member of trans advocacy group No Pride in Prisons. Ti’s arguments were passionate and concentrated on the innate violence of the prison system.

Lexie Matheson, who has been an out trans woman for over twenty years, opened up discussions to the wider social situation for trans people in New Zealand. A lecturer at AUT, Lexie is a fierce advocate for trans rights and is unapologetic in her fight for social and legislative equality.

The evening’s debate was fiery to say the least, with each of the panel clearly personally invested in the issue at hand. Passion laced words as they spilled from the mouths of the three, and the audience could not help but notice the degree of emotion that was invested in their speeches. For Kelly, Lexie and Ti, trans and gender diverse rights are their rights.

The conversation canvased a range of different aspects of trans rights in prisons including investigating the current situation for trans prisoners, access to health care specific to trans people, and possible solutions for the current crisis gripping New Zealand prisoners.

Proceedings officially begun with Chair of the Symposium Gary reading out a paraphrased version of a statement released by the Department of Corrections. The statement of three pages in length responded to the symposium and allowed the institution to contribute to the panel without being present.  The statement, however, was quickly pulled apart by the panel who revealed from personal experiences the generalizations and falsities expressed.

“They are tokenistic weasel words [and they] do nothing to address the actual issues that trans prisoners face” says Ti.

Corrections expressed that they are “undertaking a comprehensive programme of work over the next year to support transgender prisoners,” however Kelly Ellis was quick to respond that any training which has taken place is “completely inadequate and utterly non-evident.”

The statement went on outline the rights that trans prisoners have to request changes in their incarceration so they may be housed in a prison which aligns with the gender they identify with, but failed to show any statistical evidence or time required to see this move through.

Corrections said that they “absolutely refute any suggestion that rape is a systematic issue in New Zealand prisons” however Kelly Ellis claims that 75% of trans people she has represented in the justice system have been raped while in prisons. Ti Lamusse also suggested that mandatory strip searches are a form of state mandated sexual assault.

Prisoner complaint facilities were also explored in the statement, but once again the panel disagreed with what the statement suggested. “There are no barriers to prisoners making complaints” says Corrections. However, the panel suggested that it is often “the staff investigating themselves.” The panel did not see the complaints process conducive to justice.

Corrections expressed a desire to work alongside the EJP and NPIP for the betterment of trans prisoners.

The panel discussed the current situation for trans prisoners with none of the three believing that the way things are operating is adequate at all.

“Trans prisoners don’t have a lot in the way of rights” says Kelly, who goes on to comment that in many ways trans prisoners are “specifically excluded.”

She comments on the double standard of allowing cis gendered sexual offenders to be housed in prisoners aligning with the sex of their victim but barring trans prisoners from the same right specifically “singles out trans people” and means they are subject to different rules than cis gendered inmates.

Kelly said that this double standard is “a complete load of shit” which met with a resounding murmur from the audience and nods by the other two panelists.

Ti’s argument for the elimination of prison sentences for trans people in New Zealand was spoken with passion. They  argued that trans people experience a disproportionate amount of punishment while incarcerated. While this may be true, their argument seemed to lean more towards a complete abolition of the prison system which let them down with it’s broad scope reaching far beyond the issue at hand. However Ti is a forward thinker who seems to consider the long term goals as well as the things we can work to achieve in the close future for trans prisoner rights.

Lexie summed up the problem and plausible beginning to finding a solution with her comment that “everything in our country filters down from legislation. The Human Rights Act does not look after us.”

Kelly followed this up in saying that “[trans prisoners] are sub human” at a legislative level within the prison system, and that a remedy to this would be being written into the Human Rights Act to account for gender identity.

Kelly gave examples of previous leaders avoiding the issue of gender identity because it could negatively affect their changes of winning elections. Helen Clark withdrew a bill that called for gender diversity to be recognized on the HRA because she considered it to be “too controversial” so close to an election she went on to lose.

Louisa Wall also attempted to change the act but was denied by current Minister of Corrections Judith Collins.

“If a minority group isn’t a priority to the government then we are up shit creek” says Lexie.

A hot topic was Pride and the presence of Corrections in the parade for the previous two years. The panel unanimously called for the audience to put pressure on the Pride Board to stop Corrections “marching in uniform” in upcoming years.

“Corrections can march” says Lexie, “but not in uniform.”

According to the panel, allowing the Department of Corrections to march in uniform supports “a violent, racist, colonial system” which systematically discriminates against trans prisoners.

In all, the panel was interesting and informative in it’s conversation but more input from Corrections (more specifically, a Department member who could participate in the panel rather than releasing a rather luke-warm statement in leiu of the symposium) would have provided a more well rounded argument.

It is clear that changes must be made to the current legislation surrounding the incarceration of trans prisoners. For an over-view of the topics covered, visit the Equal Justice Project website to read The Rights of Transgender People in Prison Symposium Paper.