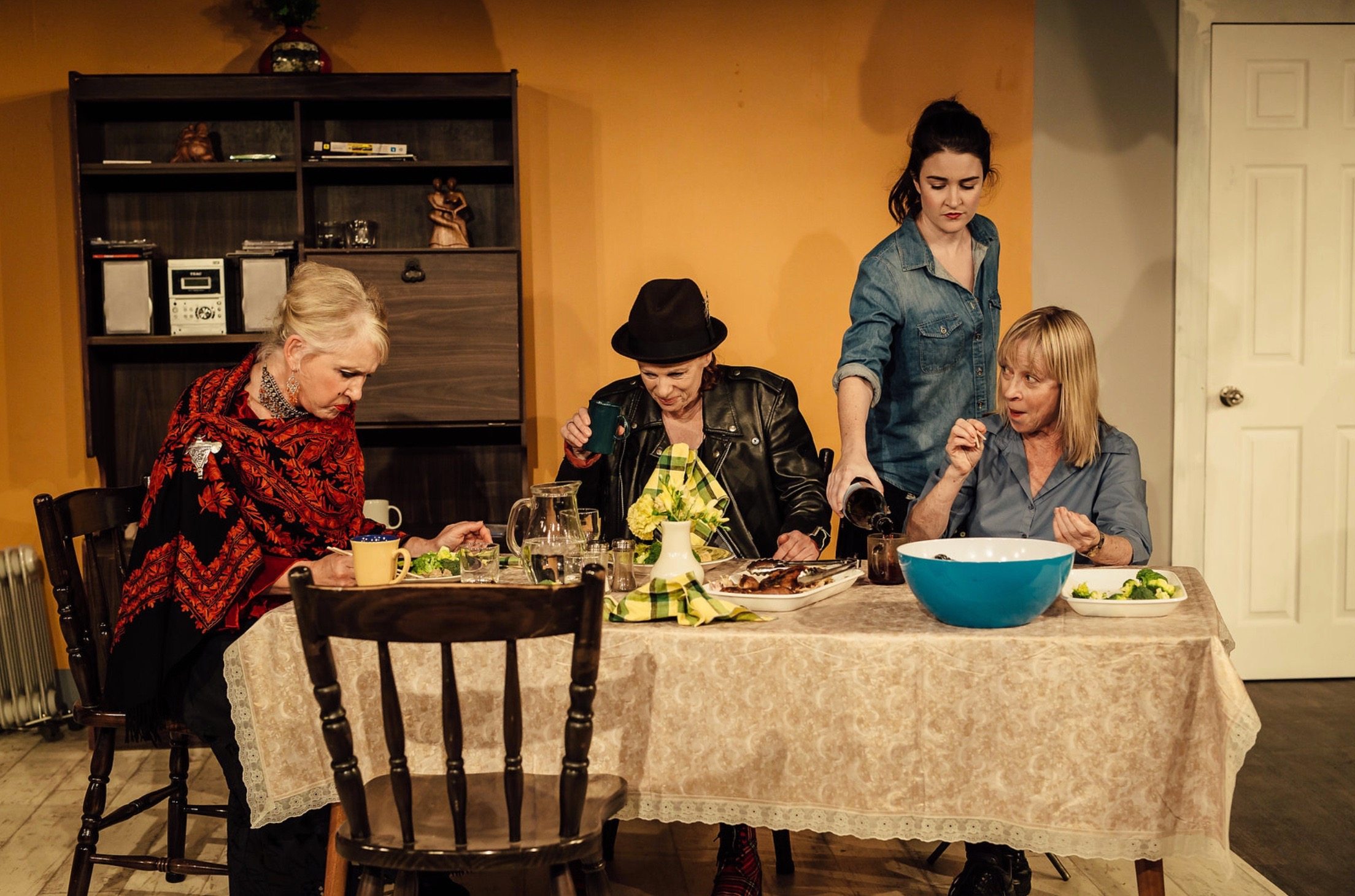 SHAM is the latest work brought to the stage by Jess Sayer. The one act play of sixty minutes explores a tumultuous remains of a relationship between two vastly dissimilar sisters after a twenty-year separation, and the familial fallout that follows their unpleasant re-acquaintance. The presence of a mature lesbian relationship sets the work apart from most; both in the forefront of the play and yet seemingly inconsequential. A daughter complicates the mix. A boiling pot of strong, female characters is put over heat.

The play consisted of a singular room designed by set designer Daniel Williams. Two thirds of the stage are taken up by the brightly pumpkin coloured dining room.  A simple wallpaper change signals the entrance into the living area. Two doors flank the set – one accessing the unseen kitchen, and one leading outside. The urban setting reminded me of my grandparent’s home in the late nineties – an old scrabble board wedged between other dusty games on a display cabinet, scattered CD’s above a dated stereo, a broken oil heater tucked in the corner. I was immediately drawn in by the realism of the set, and relaxed into my seat knowing the risk of dreaded audience participation was probably not something I had to worry about.

The performances were nothing short of magnificent. Three of New Zealand’s most practised and lauded stage actresses effortlessly drew the audience into the fabulously farcical domestic drama. Michelle Hine in the role of Meryl was a convincingly livid, resentful younger sister to Annie Whittle’s obnoxious queenly Dame Neva Farris.

Darien Takle’s performance as Neva’s seventies-bred post-protest lesbian partner was a personal highlight. Having seen her recently perform in Roger Hall’s You Can Always Hand Them Back to a rather different crowd, this performance had the audience doubled over in laughter at her drunken stupor and overtly butch persona which could have been lost to cliché without Takle’s spectacular talent. In my opinion, both the character and the actress stole the show.

The distinction of these three veteran’s performances successfully supported Torum Heng in her performance as Fern, Meryl’s 20-year-old daughter. Both the character and performance by the actress only improved as more interaction developed between the four characters.

The play itself threatened to be too obvious in its first half hour. Sharp tongued quips and cutting humour exposed fractions of the eventual outcome, but playwright Jess Sayer did not allow enough to slip through as innuendo and insinuation for the audience to not be surprised by the twist on twist in the final moments of the play. The dialogue was funny one moment and confronting the next without confusing the audience. Sayer has created characters who are unique, and in spite of each of their short comings, foster genuine feelings of pity, antipathy, empathy, and longing for a return to innocence from the audience.
The play had very few flaws, and excellence in the Art saved any fumbled opening night lines. I wasn’t happy about the bench seats, and I near copped an uncooked head of broccoli during an emotionally charged dinner scene. But SHAM was also the most well-rounded, sublimely performed piece of theatre I have seen since Kiana Rivera’s Puzzy. I would happily brave the bench seats again to experience this crafted work for a second time, and recommend highly that everyone who adores theatre (or indeed likes to both laugh and anguish in a sixty minute period) get along to see this magnificently witty and gritty drama.