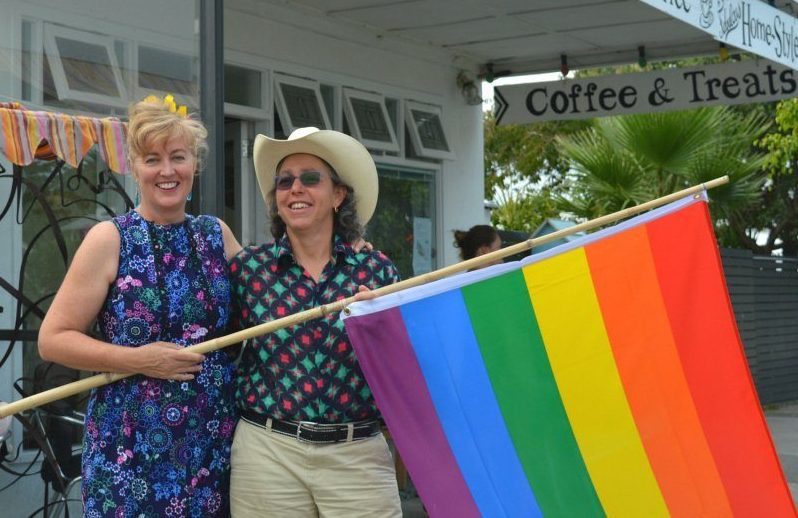 It’s not often Auckland gets linked with Einstein, a link explored in a intellectually-engaging new Kiwi play now on at Tiny Theatre in Westmere  – and hopefully to return for another season in October.

The play is Bright Beyond Belief, a pocket (45 mins) political peice, the creation of Lisa Prager and Verity George. The two wrote the script and are the two actors.

As we take out seats, we see a bushy-bearded middle-aged man in a natty tartan suit working at a blackboard. The noise of our entry doesn’t affect his solemn concentration.  This is nineteenth century Scottish physicist and mathematician James Clerk Maxwell (1831- 1879), charmingly played by Lisa Prager.  Maxwell is fascinated with nature, finding it ‘always true’. In particular, he is fascinated with electro-magnetic theory and light.

His investigations into light gave him equations which, when published, became part of the foundation of Einstein’s work: ”I couldn’t have advanced my work without Maxwell’s equations,” he declared. And Maxwell’s investigations into light and colour vision founded our understanding of both colour and vision, which in turn eventually created television, and of course, the Internet and Facebook.

His link to Auckland is his three-times great niece, Penny Bright, an Auckland mayoral candidate in the coming election. Ms Bright, played enthusiastically by Verity George, is no slouch in the maths and statistics field, perhaps a trait inherited from her illustrious ancestor. It gives some rather important clout in support of her campaign for open, transparent government and judiciary transactions.

Through an awe-inspiring dream sequence (lighting design by Andrew Furnass, operated skilfully by Amanda Tito), the physicist and his great (times 3) niece meet.   Introducing the physicist to some of the achievements of modern physics: – the mobile with its colour camera, the computer, email – provides much humour and playful warmth, which both Prager and George expand beautifully.

It’s a play which could also do very well in schools and colleges, as one teacher in the audience remarked in the elated buzz following its triumphant finale. “It provides the human element to the often-bewildering field of physics and general science,” he commented.  As our future is clearly to be ever-more dominated by the achievements of modern physics, mounting such a play in schools would be a helpful step.

The play opened Thursday 18 August and has been booked out for its four-night run. So engaged were the audiences, however, that a final show may be offered on Sunday.

Ring Garnet Station (09 360 3397) to find out;  if you can’t see it this time, keep an eye open in October, as many fans of the play are already pressing for a second season.