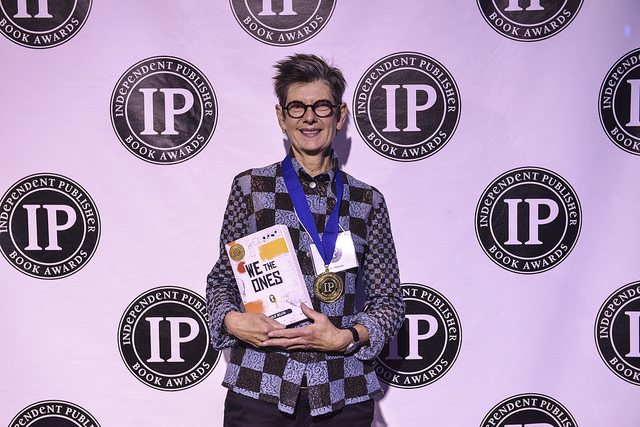 Grey Lynn author, Julie Helean, has just been awarded a gold medal for best work of fiction from the Australia/New Zealand region in the IPPY Awards for her novel We the Ones.

The “IPPY” Awards, launched in 1996, are designed to bring recognition to the most deserving, but often unsung titles published by independent authors and publishers. Established as the first awards program open exclusively to independents, over 3,000 “IPPYs” have been awarded to authors and publishers around the world. The awards were recently held in New York.

Julie is back from New York and described the win as a huge boost to her writing career.

“It’s thrilling to have your independently published work recognised and it was especially great, as a New Zealand author, to meet up with writers and publishers from all over the States.”

Over 300 people attended the awards night held in Times Square, with medals awarded for over 100 categories of writing including an LGBT+ section which was won by Michael Scott Garvin for his novel A Faithful Son.

Julie’s book, We the Ones, is set in Auckland during the heady times of political activism in the late 80s.  It follows the overzealous attempts of a young Pakeha lesbian to make her mark in the anti-racism movement, and to stop the Queen from attending the 1990 Treaty celebrations.

The IPPY gold is the second award for Julie, the first being the Katherine Mansfield Award in 2012.

The book is on sale at the Women’s Bookshop, Unity and University shops, and is on Amazon.