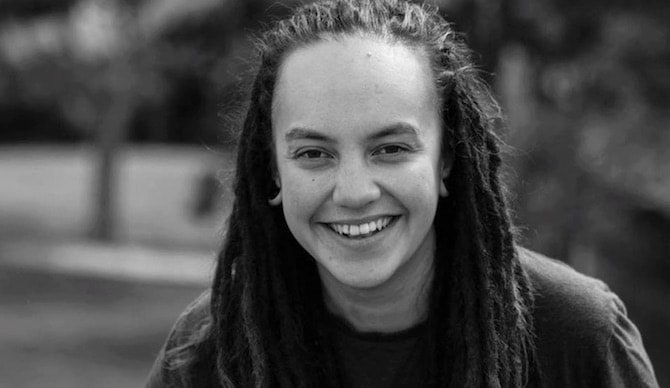 Laura O’Connell Rapira (Te Āti Awa, Ngāpuhi and Te Rarawa) was the kind of kid that starts a campaign against litter at her school. While things have changed a bit since then, she’s still got the same passion as she did in the schoolyard all those years ago.

She’s not shy of getting involved in the causes that matter the most to her, you only have to look at her most recent achievements – she was a finalist for Young New Zealander of the Year, is a founding team member and Director of Campaigns at ActionStation and is co-founder of RockEnrol – to realise she’s an all-around wahine toa.

Before the last elections, Laura recognised that voter turnout among young people was pretty dismal so decided to do something about it, successfully helping to increase the youth vote by 3.4 percent.

As a young Māori woman with Irish heritage, who has a female partner (and is a vegan), Laura acknowledges that being part of several marginalised groups gives her great empathy for other people who are in minority communities. It also makes her an advocate for the underdog and quite good at bridging across culture.

“I’m the type of person who will sit down with someone with slightly different views and try and talk it out and find common ground.”

“If we can’t find common ground, all good, we can go our separate ways, but I would rather walk in spaces and try to advocate from a place of mutual respect than to go straight to protest as the first tactic. I do think protest is important, but it’s not my preferred tactic.”

Laura isn’t just sitting down having cups of tea and talking it out, she’s also campaigning within digital spaces because that’s where the people are.

“Effective activism and campaigning has always been about going where people are and people are online,” she says mentioning that roughly 94% New Zealanders have a Facebook account.

“Digital organising enables communities to organise at a speed and scale that has never, ever been a reality in previous generations, in activism, and I think that’s really powerful. I think we are only really at the beginning of unleashing that power and I’m really excited to see where it goes.”

This election she and the RockEnrol team are back at it, encouraging youth to enrol, vote and make sure their voice counts.

While there is a myriad of reasons why people, including young people, don’t vote, she says the most simple reason that exists is that politicians simply won’t prioritise young people’s ideas, concerns or needs without young people’s votes.

“As long as we have a representative democracy system, politicians are only going to represent those that turn out to vote in that system and that is why we need to be there.”

“If you look at the young people that don’t vote, a lot of the time it’s people that come from marginalised communities, they come from low income, low education backgrounds or they’re of Māori or Pasifika descent.

“Those are the people who have been left behind by society and we’re asking them to participate in this strange democratic process that, as far as they can see, hasn’t done a lot to serve them. Then we wonder why they don’t participate when we haven’t given them the support, or the inspiration, or the confidence, community, and skills – all of that kind of stuff to do so.”

“It’s not just ‘young people’ as this broad homogenous term, it’s specifically young people who have also been left behind by society.”

She says more young people voted in the last election than the election before it, so the number of voters is actually going up, not down.

As more young people start to believe in their political power and more and more media outlets, influencers and politicians start speaking directly to youth, writing policy that matters to them, Laura says the number of young voters is only going to go upward.

“You’re not going to vote for a thing if you don’t see yourself represented in it, if you’re young and brown and all you see is old white dudes, you’ll think ‘that’s not for me’.

“We’ll never solve the problem of youth participation in politics unless we ask them what it is they want.”

So, if you’re thinking of skipping voting, Laura says “This year the electoral commission has made voting easier than ever before, you can enrol and vote at the same time at an advanced voting booth and there will be hundreds near you.

“It will literally take five to ten minutes of your time to help shape the next three years and possibly beyond that depending on what decisions our elected representatives make. It’s not a huge amount of time spent for quite a lot of influence.”

If that doesn’t do it for you, then do it for those who can’t vote at all.