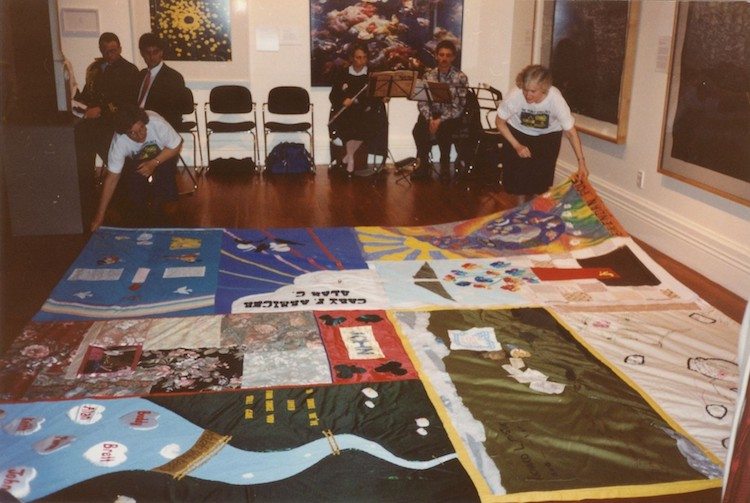 Sleeping Arrangements, curated by Simon Gennard at The Dowse Art Gallery, presents a journey over four decades since the onset of the HIV crisis and the impact it has had on our lives. 21st April – 19 August 2018.

A selection of quilts by Malcolm Harrison (1941-2007) is a graphic language in which the artist’s skill as a visual storyteller comes to the fore, sometimes playfully coy, sometimes, unashamedly brave. The stories they tell place Harrison within a community of friends and lovers and prompt a critical re-examination of the ways the artist navigated his identity, politics and sexuality through a complex and often contradictory aesthetic and sensory vocabulary.

Alongside Harrison, three artists are featured whose work challenges the relationship between language, desire and identity.

My Body… by Zac Langdon-Pole (1988) combines the contemporary perspective of the artist with the experience of the old, a visual presentation of a poem spoken by Zac’s uncle shortly before his death of AIDS-related illnesses in 1991.

Micheal McCabe (1994), with his interest in queer architecture, takes centre stage with his installation of benches from which the observer can immerse them self in the experience of contradiction and truth, joy and despair.

Micheal will be talking at the official opening at 2 pm on the 21st April.