The Grammy Award-winning musical which features the legendary music of American Punk-Rock band, Green Day tells the story of three boyhood friends, each searching for meaning in a post 9/11 world.

Described as a story of youthful disillusion and the mistrust of society and government, a sentiment that has never been more relatable and current, both abroad and locally with the current turbulent political climate and a Trump Presidency.

Hit songs that feature in the musical include ‘Boulevard of Broken Dreams’, ‘21 Guns’, ‘Wake Me Up When September Ends’, ‘Holiday’ and the blockbuster title track ‘American Idiot’ from Green Day’s 2004 Grammy Award-winning, multi-platinum album. 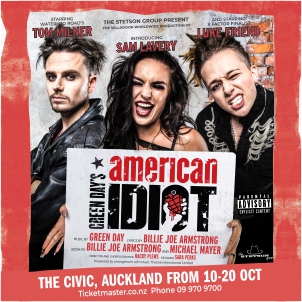 Auckland will see a 15 strong UK cast plus a 4 piece live band, directed and choreographed by Racky Plews with musical supervision by Richard Morris, sound by Chris Whybrow and lighting by Tim Deiling. The production is produced by Selladoor Worldwide and presented by arrangement with Music Theatre International Limited and Stetson Group.

American Idiot will open on Thursday 10th October for a strictly limited season. Tickets are on sale from Ticketmaster.