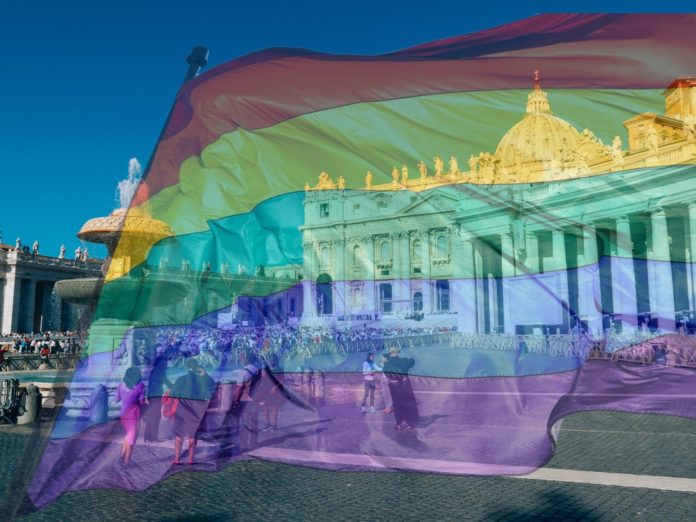 The polish gay couple, made famous earlier in the year by making and distributing rainbow coloured face masks, have gone one step further in their battle against the homophobic polish government and visited the Vatican to ask the Pope for help.

Earlier this month, the two men arrived at the Holy See where they raised a rainbow flag on which they wrote “HELP”.

They want the Pope to speak on the situation in Poland, where state homophobia has set in since the rise to power of the Law and Justice party.

“The Polish bishops call us pedophiles, they say that we are a disease and even that the Covid-19 is a global punishment for LGBT+ sins,” said Dawid and Jakub.

After holding the flag up so the pontiff could see it from his window during Sunday mass, the couple received support from some unusual circles.

“We were amazed how many Catholics from different countries approached us with words of support,” the couple wrote on Instagram.

“Nobody felt offended by the rainbow, the police did not chase us out, and when we were alone in the square an hour longer, one of the priests came to us, offered water and listened to what we had to say.

“Because the rainbow does not offend.”

Pope Francis has often contradicted himself on the subject of homosexuality.

In 2019, however, he declared that “the heart of those who reject” gays is “not human”. The pontiff is described as more open than Benedict XVI, his predecessor, but he remains opposed to marriage and adoption for all couples.

The two activists explain that they want to change the Polish Church.

“We realized that what the Polish church is doing in our country is contrary to the teaching of Pope Francis,” the couple said.

“We decided to go and draw his attention to the fact that the Polish bishops are fueling hatred towards us and we really hope that he will take action.

“If we were the bosses of a company, we would react by seeing our employee do something against our order. This is exactly what we expect from the Pope.

“Especially since the government in place regularly justifies its conservative policy by religion.”

In April, the couple distributed masks in the colors of the rainbow flag in “LGBT-free” areas.

These areas now represent about a third of the territory.

The European Commission refused to give grants to six cities that declared themselves LGBT-free, but the government said it would fund a municipality that did not have its grants.

The minister behind this exit also wants to extend the “LGBT-free” zones to all of Poland.