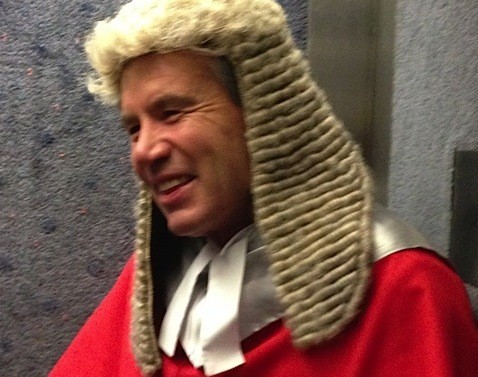 In the second half of our two of our chat with Justice Matthew Muir, he tells Oliver Hall about his upbringing, his partner and the work that has inspired him most.

Please tell me a bit about your background: where did you grow up?

I grew up on a farm at Te Kohanga, a small settlement between Tuakau and Port Waikato. It was a blissful and romantic childhood. My Danish grandmother – a force of nature but a source of unqualified love, owned the property adjoining my parents. Our days were spent in her beautiful two acre garden and adjoining orchards, catching kura in the streams, swimming in the waterholes, tending the dogs and our pet sheep. But at a relatively early age my parents thought a city education was necessary and we moved to Auckland where I attended Gladstone Road Primary in Mt Albert and later Avondale Intermediate and Auckland Grammar.

When and where did you meet your partner James Peters?

I met James in the context of the great decriminalisation debate of 1985/86. Because of his high profile he was asked to assist a young gay man who had languished in Mt Eden prison with no support structures, after being arrested on theft charges laid by his mother. James attended a first mention at the Pukekohe District Court but was advised that he needed to organise legal representation. I was, at age 25, one of the few openly gay court lawyers in the country. The rest, as they say, is history.

Do you think NZ is a fair and equal country for GLBTs?

I think we have every reason to be very proud of New Zealand’s legislative history on GLBT issues. We have achieved the trifecta of decriminalisation, anti-discrimination laws and marriage equality. For educated professionals such as myself I believe that the country certainly now qualifies as fair and equal and for probably 20 or more years I have never considered my options in life in any way limited by my sexuality. However I am also conscious of the fact that I belong in a profession which typically

places high value on human dignity and that I have therefore had (at least in terms of career) a relatively privileged run. Studies released within the last two weeks indicate, in respect of mental health statistics in particular, that there is still much work to be done. Bullying is still rife within the school environment and there are undoubtedly some work places where hostility or ostracism are still the norm. Likewise there remain many family environments (like my own where my parents had strong religious objections to my sexuality), which are far from supportive. For young gay men and women growing up facing those issues a special courage is still required. As Tim Cook has said, it can be tough and uncomfortable at times to face these issues publicly but it is ultimately also empowering and liberating. And if it does toughen you up a little on the way, that’s probably going to come in handy too.

What inspired you to study law?

Watching Perry Mason with my grandmother on her black and white TV aged about 7. But for many lawyers I know the inspiration has come from my own favourite character in literature Atticus Finch in Harper Lee’s To Kill a Mockingird.

Of your work as a barrister is there a case you are most proud of your work on and why?

Yes one case particularly stands out from a practice which was primarily focused on relatively “dry” commercial and insurance litigation. I was asked to represent a young Indian boy who was diagnosed with leukaemia while in New Zealand temporarily. His medical insurance had a repatriation provision which would have seen him returned to India. His only hope of survival was a bone marrow transplant and there was no available sibling match. All the medical evidence out of India was that if he was sent back there he would not survive. The insurers were ultimately convinced to fund the procedure here which was, in turn, a complete success. James and I have become close friends of the family. I felt that, among a sea of relatively anodyne commercial disputes, I had done something that really mattered.