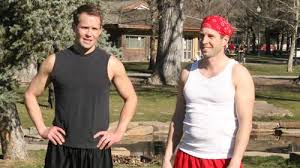 The bizarre new series set to premiere on US cable television later today follows four men who admit they are attracted to other men, but choose to live as ‘heterosexuals’ because of their Mormon faith.

Gay rights campaigners have called for a the show to be cancelled because of the show’s promotion of the idea that homosexuality is a choice which can be cured by conversion therapy.

While TLC, the network airing the show has denied it condones such ideas,  it has been revealed that at least three of the stars of the show are spokespeople for organisations which promote the use of conversion therapy practices as a way of  ‘curing’ homosexuality.

GLBT organisation GLAAD has condemned the show and it’s promotion of conversion therapy, with President Sarah Kate Ellis saying that ‘Basically, gay reparative therapy is the notion that you can take the gay out of somebody, which we know is not true,’ Ellis told Entertainment Tonight . ‘Medical experts have debunked that for ages now, and also it’s illegal in a lot of states.’

More than 123,000 people have signed a petition to have ‘My Husband’s Not Gay’ cancelled. But TLC has refused to back down and the show is scheduled to go to air in the United States later today.