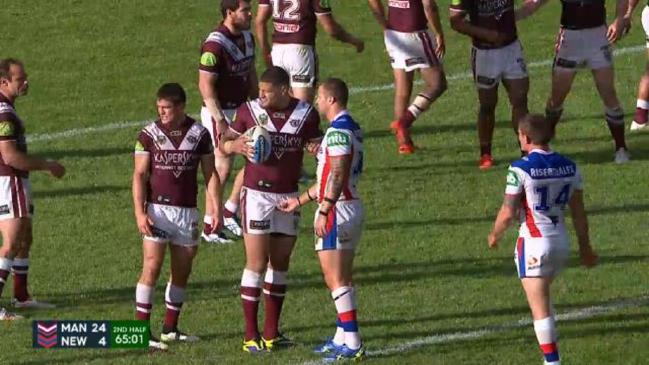 Willie Mason is downplaying an incident in which his former Newcastle teammate Korbin Sims grabbed his crotch towards the end of Sunday’s Manly vs Newcastle clash.

Sims was caught on camera grabbing at Mason’s crotch as he prepared to play the ball during the second half of Manly’s 30-10 NRL win over Newcastle at Brookvale Oval on Sunday.

Speaking to the Sydney Morning Herald, Mason, who now plays for the Manly Sea Eagles said it was the two being “reacquainted.”

“I thought it was hilarious,” Mason said. “I hope it doesn’t [get Sims in trouble] because me and Korbin are really good mates and I think it was just unlucky, the timing of it all. I knew what he was doing – I was talking to him while he was doing it. I was sort of laughing, I didn’t flinch. I knew what was going on. It was quite funny to me. He’s just a good, young kid and I would hope nothing would be done about something like that.”

You can view the incident in full below: